The Politics of Pain: Postwar England and the Rise of Nationalism (Compact Disc) 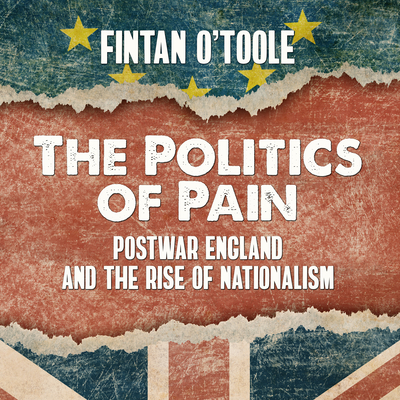 By Fintan O'Toole, Bruce Mann (Narrated by)
Call or email to see if a used copy is available.
Out of Print

Fintan O’Toole, in his The Politics of Pain, asserts England has become a nation of submissives, supporting his thesis with the fact that Fifty Shades of Grey is the nation's best-selling writing in any genre so far this century. With Shakespeare's histories, Orwell’s 1984, and Dickens’ novels’ spiritual reckonings as his backdrop, O’Toole parses literary, dietary, and musical trends since World War II, exploring the Brits' self-pitying rally behind John Lydon, née Johnny Rotten of the Sex Pistols, in promoting a politician who openly admitted his facts were mostly mere figments of his own imagination, so leading to the passage of Brexit, as if a flailing of itself.

From one of the most perceptive observers of the English today comes a brilliantly insightful, mordantly funny account of their seemingly irrational embrace of nationalism. England's recent lurch to the right appears to be but one example of the nationalist wave sweeping across the world, yet as acclaimed Irish critic Fintan O'Toole suggests in The Politics of Pain, it is, in reality, a phenomenon rooted in World War II. We must look not to the vagaries of the European Union but, instead, far back to the end of the British empire, if we hope to understand our most fraternal ally-and the royal mess in which the British now find themselves. O'Toole depicts a roiling nation that almost ludicrously dreams of a German invasion, if only to get the blood going, and that erupts in faux outrage over regulations on prawn-flavored crisps. A sympathetic yet unsparing observer, O'Toole asks: How did a great nation bring itself to the point of such willful self-harm? His answer represents one of the most profound portraits of the English since Sarah Lyall's New York Times bestseller The Anglo Files.