Firefly: Return to Earth That Was Vol. 3 HC (Hardcover) 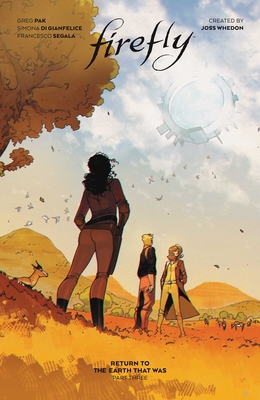 Can the Serenity crew finally take care of the Alliance once and for all?

The crew of the Serenity is stretched too thin and in unfamiliar territory, but Kaylee has had enough. Despite being at odds with the Jefa, they’ll have to turn their attention toward a mutual threat, along with other factions. Meanwhile the Washbot continues to come into his own, as the various groups— our heroes, Earthers, plunderer workers, and others— will also learn how imperfect people can come together to build a community, and a sense of hope. But that hope may be short-lived, as they discover that the Alliance has built portals, and are coming to The-Earth-That-Was... in this new chapter of Firefly by New York Times best-selling writer Greg Pak (Darth Vader) and rising star artist Simona Di Gianfelice (Power Rangers). Collects Firefly #33-36.

Greg Pak is an American film director and comic book writer, known for his work on books published by Marvel Comics, including X-Treme X-Men and several titles featuring the Hulk and Hercules.[1] In 2019, Pak began writing Star Wars comics for Marvel.