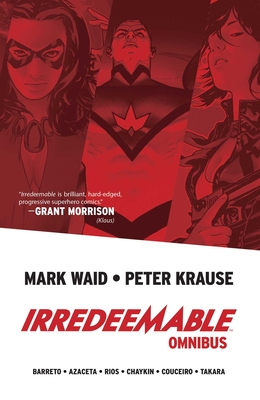 The complete collection of Mark Waid and Peter Krause’s critically acclaimed epic in one volume for the first time ever.

THE COMPLETE COLLECTION OF THE ACCLAIMED SUPER HERO EPIC.

When the Plutonian, the world's greatest superhero, snaps and turns into the world's greatest villain, only his former teammates have a chance at stopping his rampage. But while on the run from the world's most powerful and angry being, will these former teammates discover his secrets in time? How did he come to this? What became of the hope and promise once inside him? What happens to the world when its savior betrays it? What makes a hero irredeemable? For the first time, the entire Irredeemable saga is available in a single volume.

The acclaimed team of writer Mark Waid (Kingdom Come, The Avengers) and artist Peter Krause, along with some of the most acclaimed creators in comics, challenge everything you think you know about super heroes by exploring the good, the bad...and the irredeemable inside all of us.

Mark Waid is an Eisner and Harvey Award–winning comics creator. He has worked on every major comic book character in the industry. Some of his best known work includes Captain America, Fantastic Four, and Black Widow for Marvel Comics. Waid enjoyed his greatest outpouring of critical acclaim with the Eisner Award–winning Daredevil—including a revered collaboration with frequent artistic partner Chris Samnee—and has also authored Kingdom Come, one of the bestselling graphic novels of all time.