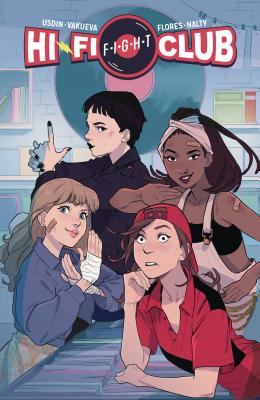 When Chris joins the staff at her local record store, she’s surprised to find out that her co-workers share a secret: they’re all members of a secret fight club that take on the patriarchy and fight crime!

Starry-eyed Chris has just started the dream job every outcast kid in town wants: working at Vinyl Mayhem. It's as rad as she imagined; her boss is BOSS, her co-workers spend their time arguing over music, pushing against the patriarchy, and endlessly trying to form a band. When Rosie Riot, the staff's favorite singer, mysteriously vanishes the night before her band’s show, Chris discovers her co-workers are doing more than just sorting vinyl . . . Her local indie record store is also a front for a teen girl vigilante fight club!

Follow writer Carly Usdin (director of Suicide Kale) and artist Nina Vakueva (Lilith’s World) into Heavy Vinyl, where they deliver a rock and roll tale of intrigue and boundless friendship.

Carly Usdin is an award-winning filmmaker based in Los Angeles. Her first feature, Suicide Kale, won the Audience Award for Best First Feature at Outfest 2016. After playing over 30 festivals worldwide the film is now available on iTunes and Amazon Prime. In 2017 Carly served as showrunner and director for the scripted series Threads, produced by New Form for Verizon’s go90 platform. The 20-episode horror and comedy anthology series brought to life outrageous stories from internet forums like Reddit. Carly is also the creator and writer of two comic book series for BOOM! Studios: Heavy Vinyl (in stores now) and The Avant-Guards (out in January 2019). Heavy Vinyl was nominated for a 2018 Prism award, honoring the best in LGBTQAI+ comics.