Elise and the New Resistance (Hardcover) 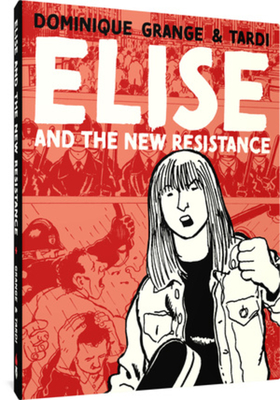 Feted French cartoonist Tardi brings his mastery to bear on a gripping first-person account of the powerful student protest movements that rocked France from the late-’50s to the ’70s.

In May 1968, France exploded. Leftist student groups occupied the streets of Paris, riot police clashed with protesters, and a general strike spread across France like wildfire, threatening to grind government and industry to a halt. And at the heart of it all — Elise.


Ten years earlier, Elise came to Paris to try her luck in show business. While she met with success as a pop singer, she soon found herself radicalized by the Algerian War and the poor treatment of Algerian immigrants in Paris. For the next 20 years, she would join the fight against labor exploitation, social injustice, and racism in France — risking it all for progressive causes. The veiled autobiography of singer Dominique Grange, Elise and the New Resistance is an exhilarating glimpse into the front lines of the spirited social movements of late-20th century France. Drawn with typical mastery by legendary French cartoonist Tardi, this graphic novel resonates powerfully at a time when the fight against injustice still rages.

Tardi is a pioneering, internationally award-winning European cartoonist. His Adele Blanc-Sec series was adapted into a feature by Luc Besson, and the animated film April and the Extraordinary World was inspired by his cartooning. He lives in Paris with his wife, the singer Dominique Grange, and their cats.

Dominique Grange is a translator, writer, and recording artist specializing in protest songs through the centuries, living in Paris.

Jenna Allen is a freelance translator based in Colorado.

Elise is a tribute to revolutionaries who still believe in the great night. Tardi's line perfectly captures the violence of the clashes with the police and the tumult of those powder years.

This comic is a raw, counter-cultural document. Tardi and Grange reconstruct a history of protest and deliver a testimony.
— L’Humanité

A comic with a raised fist.
— Actua BD

A new Jacques Tardi album is always an event in the world of comics.
— Le Telegramme