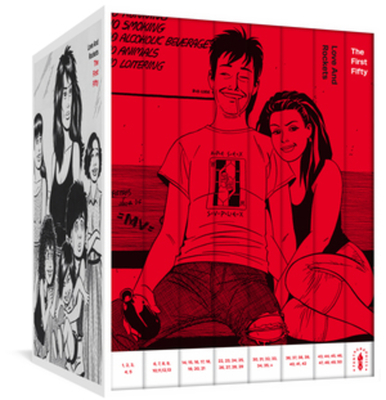 In celebration of the 40th anniversary of Fantagraphics’ flagship series, this prestigious box set presents bound facsimiles of the original fifty issues of the Love and Rockets comics magazines.

Gilbert and Jaime Hernandez are now recognized as two of the greatest cartoonists in the history of the medium — award-winning, world-renowned, critically acclaimed. But in 1982 when the first issue of Love and Rockets came out, they (occasionally working with their brother, Mario) were two young, struggling, unknown cartoonists who were bucking the dominant comic book trend of costumed characters and adolescent content with intimate, complex, humane, novelistic stories told in comics form. Love and Rockets has appeared in a variety of formats over the years and continues to this day, but the original 50-issue run represents a milestone in comics history. Fantagraphics is celebrating and honoring the 40th anniversary of Love and Rockets and the debut of the Hernandez's' first published comics with a gigantic eight-volume slipcase reprinting each issue in a facsimile edition.


Their organic body of work is available in a series of scrupulously and logically organized graphic novels, but here Fantagraphics honors the original quarterly format by presenting the comics as they appeared between 1982 and 1996, recreating not only the reading experience of tens of thousands of fans, but of a particularly fecund period in comics history when a new generation of cartoonists was exploding the idea of what comics could be. Painstakingly recreated in issue-by-issue facsimile, this boxed set includes every cover, comics page, and letter column (even advertising!) in seven hardcover volumes. An eighth volume densely collates selected essays, reviews, and profiles that appeared in the popular (and unpopular) press between 1982 and 1996, along with over 100 pages of additional, rarely-seen comics from the period by all three Brothers, plus dozens of book and magazine covers — a virtual history of the growth of Love and Rockets and the simultaneous rise of the literary comics movement of which they were exemplars and trailblazers.

Product dimensions for Love and Rockets: The First Fifty:

Gilbert Hernandez was born in 1957 in Oxnard, California, and is considered one of the greatest living comics writer-artists in the world. In 1982, Hernandez co-created, along with his brothers Mario and Jaime, the ongoing, iconic, internationally acclaimed comic book series Love and Rockets, one of the greatest bodies of work the medium has ever seen. In addition to his work on Love and Rockets, its spinoffs, and side series, Hernandez has released a prodigious amount of original graphic novels and miniseries, such as Sloth, Bumperhead, and Marble Season. He also collaborated with Darwyn Cooke on The Twilight Children for DC. He was inducted into the Will Eisner Hall of Fame in 2017 and is the recipient of a Fellow Award from United States Artists and a PEN Center USA’s Graphic Literature Award for Outstanding Body of Work. Hernandez lives in Ventura, CA, with his wife and daughter.

Jaime Hernandez was one of six siblings born and raised in Oxnard, California. His mother passed down a love of comics, which for Jaime became a passion rivaled only by his interest in the burgeoning punk rock scene of 1970s Southern California. Together with his brothers Gilbert and Mario, Jaime co-created the ongoing comic book series Love and Rockets in 1981, which Gilbert and Jaime continue to both write and draw to this day. Jaime’s work began as a perfect (if unlikely) synthesis of the anarchistic, do-it-yourself aesthetic of the punk scene and an elegant cartooning style that recalled masters such as Charles M. Schulz and Alex Toth. Love and Rockets has evolved into one of the great bodies of American literary fiction, spanning five decades and countless high-water marks in the medium’s history. In 2016, Hernandez won the prestigious Los Angeles Times Book Prize for his graphic novel, The Love Bunglers. In 2017, he (along with Gilbert) was inducted into the Will Eisner Comic Book Hall of Fame, and, in 2018, he released his first children’s book, the Aesop Book Prize-winning The Dragon Slayer: Folktales from Latin America. He is a lifelong Angeleno.

Mario Hernandez (b. 1953, Oxnard, California) co-created Love and Rockets, the long-running, internationally acclaimed comic book series. In 1981, he and his younger brothers, Gilbert and Jaime, self-published the first Love and Rockets zine. The Hernandez brothers’ anthology title became Fantagraphics’ flagship comic in 1982 when the independent began publishing it. He drew and wrote the occasional story for Love and Rockets, such as “Somewhere in California,” and still contributes writing, story ideas, and dialogue. In 1993, his one-shot solo comic, Brain Capers, was published, and he worked on projects such as Mr. X, Citizen Rex, and the anthology Real Girl. He won an Inkpot Award in 2012 and lives in Portland, Oregon, with his wife and children.