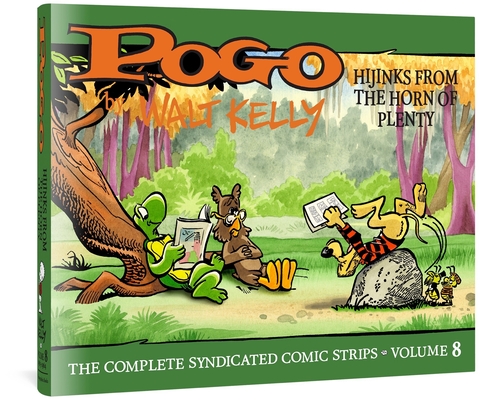 Collects the years 1963 and 1964 of the classic newspaper strip whose political satire feels more timely than ever.

Walt Kelly's newspaper comic strip Pogo was a platform for Kelly to express political satire and commentary via a wildly entertaining, motley group of swamp critters. He tackled many of the sociopolitical issues of his day: the Red Scare, civil rights, the environment, consumerism. But the strip is also a joyous, poignant, beautifully drawn, and occasionally profound work of 20th-century popular culture. It is such an all-time classic it is hard to believe that this series marks the first time that Pogo dailies and Sundays have been published in complete and in chronological order anywhere. Not only does each volume contain two full calendar years of restored black-and-white daily strips: it also includes all 104 Sundays from the same period. For the first time since their original appearance more than 50 years ago, the Sundays are in full, glorious color!

Lucy Shelton Caswell is the founding curator of the Billy Ireland Cartoon Library & Museum and a Professor Emerita at Ohio State University. Prior to her retirement, her scholarly work and teaching focused on the history of newspaper comic strips and the history of American editorial cartoons. She has curated more than seventy-five cartoon-related exhibits and is the author of several articles and books. She also serves as the vice president of Cartoon Crossroads Columbus, the annual citywide celebration of cartoon art.

This comes as a genuine gift to anyone who loved Pogo and, it is to be hoped, as an introduction for younger readers to what many people believe was the best comic strip ever drawn in this country.

We are blessed that Walt Kelly inhabited his skin for as long as he did, no doubt dying a comfortable man — all the while making the right people uncomfortable.
— Jake Tapper

Walt Kelly accompanied me from the first moment I saw his work and began to understand not about drawing but about cartooning. He filled me with a sense of what constituted  excellence in my chosen field.
— Sergio Aragones