The Art of Game of Thrones, the official book of design from Season 1 to Season 8 (Hardcover) 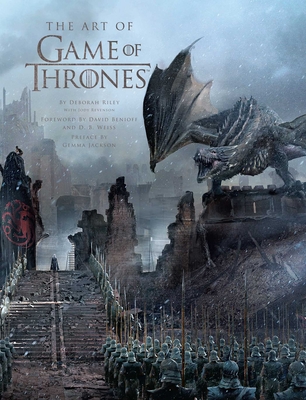 The official collection of behind the scenes concept art and production design from HBO’s landmark TV show Game of Thrones. Learn how BAFTA and Emmy award-winning production designer Deborah Riley and her team brought to life the iconic locations of Westeros and beyond.

One of 4 comprehensive and officially licensed Game of Thrones retrospective books from Insight Editions.

• UNMATCHED DEPTH - 432 pages of concept art, sketches, and production design images covering Game of Thrones seasons 1-8.
• DETAILED REVELATIONS - Comprehensive behind the scenes details covering the design of iconic locations such as King’s Landing, Winterfell, Dragonstone, and Castle Black.
• CONTRIBUTIONS FROM THE CREATORS - Authored by production designer Deborah Riley and including an exclusive foreword from Game of Thrones showrunners David Benioff and D. B.  Weiss and preface from Emmy Award-winning production designer Gemma Jackson.
• A PRESTIGE COFFEE TABLE BOOK - Deluxe 9.75 × 13 inch format.
• A SOUGHT AFTER GIFT FOR FANS - Released in time for the holiday season, this is the perfect Game of Thrones gift for fans and collectors.

Deborah Riley started her design study as an architecture student at Australia's University of Queensland and went on to complete a stage design degree at the National Institute of Dramatic Art. In 2013 she was hired as the production designer for the fourth season of HBO's Game of Thrones. Since then she has earned four consecutive Emmy Awards, three Art Directors Guild Awards, and a BAFTA for her work on the show.

It’s so beautiful I could cry. I won’t, though. Probably.
— Winter is Coming

“Everything about these books is, as you can probably guess, gorgeous.”
— Winter is Coming

“Game of Thrones’ singular attention to detail is painstakingly and lavishly chronicled in this trio of stunning coffee-table books from Insight Editions covering all eight seasons and focusing on, respectively, the museum-quality production art and designs from sketch to screen; still photos capturing the show’s most iconic and cinematic scenes along with intimate never-seen off-screen moments; and an in-depth look at the creation of the epic costumes across Westeros, from the sun-drenched denizens of Dorne to the Wildlings beyond the Wall.”
— Yahoo

“I was blown away by the sheer size of this book. It’s not your average size, coming in at 9.75 × 13 inches and well over 400 pages it feels more like a tome than a typical coffee table book.”

“Between the gorgeous art pieces and oodles of behind the scenes information for all eight seasons, there’s a lot to love about this Game of Thrones art book. If you have a GoT fan on your shopping list this year (or simply want something nice for yourself) this is an excellent choice and something many would love to see under the tree.”
— Cinelinx

“The perfect coffee table book for the fantasy nerd in your life!”
— Den of Geek