Race Me in a Lobster Suit: Absurd Internet Ads and the Real Conversations that Followed  (Paperback) 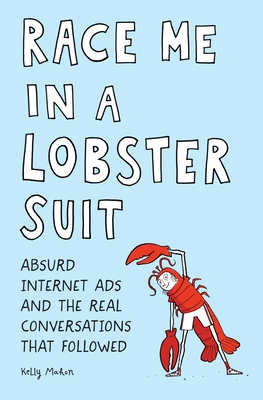 For many 30-somethings I know, the golden age of Craigslist provided a plethora of entertainment in addition to actual useful services. Need a couch? Concert tickets? New roommate? And hey, for a good chuckle, here's Missed Connections. Kelly Mahon took the entertainment value to a new level by placing prank ads on the site, and then chronicling her correspondence with the curious folks who answered her crazy queries. A quick and highly entertaining read, though I must admit I am especially disappointed that the title event never actually happened.

This collection of prank Craigslist ads and the real email exchanges that followed is the perfect gift for fans of offbeat humor.

When New York City copywriter Kelly Mahon started posting fake gig ads online as a creative outlet, she was surprised to find that there was someone interested in every bizarre job offer she dreamed up. Race Me in a Lobster Suit collects Mahon’s funniest posts, along with the improvised email exchanges with would-be cocoon knitters and lobster racers. Some correspondents became suspicious, while others seemed willing to play along. The result is good-natured comedy gold and a kind of collaborative entertainment that could only exist in the internet gig economy. Irreverent illustrations by cartoonist Graham Annable (creator of the Harvey Award nominated Grickle comics) ensure that this small book offers outsize laughs. A quick, hilarious read, Race Me in a Lobster Suit is perfect for anyone who needs a bit of absurdity to brighten their day.

Kelly Mahon is an advertising copywriter based in New York City. She’s a graduate of Fairfield University and Miami Ad School.

“This is bite-size comedy you’ll devour.”—Booklist