Revolutionary Princeton 1774-1783: The Biography of an American Town in the Heart of a Civil War (Paperback) 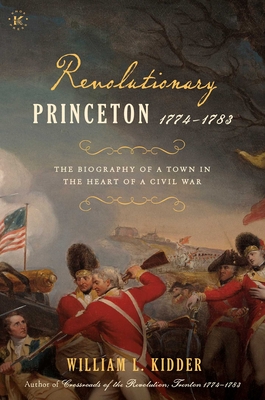 By William L. Kidder
$19.00
Click Title for IN STORE Location

Discover how eighteenth-century Princeton and its residents—including two signers of the Declaration of Independence—contributed to and were affected by the American Revolution.

The battles of Trenton and Princeton have been the subject of several recent books, but this story complements them by expanding the story to include the many experiences of the people of Princeton in the wider Revolution and their contributions to it. This story combines social history with the better known military and political history of the Revolution. It does not just deal with amorphous groups and institutions, but rather with individuals working with and affected by various groups on both sides of the conflict. Readers can identify with real people they get to know in the story. This story of Princeton unfolds in narrative format and, while deeply researched, reads more like a novel than an academic study.

Larry Kidder’s Revolutionary Princeton is a smart local history of Princeton’s place in the American Revolution. Kidder rightly reminds his readers that the American struggle for independence was also a civil war within the British empire, within each colony, and within towns, villages, and cities. The people pf Princeton lived through the civil war that was the American War for Independence. Larry Kidder deftly reminds us that the reality of the war was ugly, messy, and tore apart families and communities. ~ Ricardo A. Herrera is Professor of Military History at the US Army School of Advanced Military Studies, author of For Liberty and the Republic: The American Citizen as Soldier, 1775-1861.

Larry Kidder has given us a piercing view of a town caught up in an international and a civil war. For a time the town was at the epicenter of both, with dramatic consequences for the region and the wider conflict.  The struggles of Princetonians--patriots and tories--will disabuse any notion that the War for Independence at the local level was an easy time. Cogently written, Revolutionary Princeton is a good read and a welcome contribution to the literature of the American Revolution. ~ Mark Edward Lender, author of Cabal! The Plot Against General Washington

Larry Kidder produces another great hit with his latest book, Revolutionary Princeton 1774-1783: The Biography of a Town at the Heart of a Civil War. Most of us has heard of the Battle of Princeton and the recent saving of precious battlefield land. Larry not only does a tremendous job covering the Battle of Princeton in great detail but he also provides important details about Princeton before and after the battle, covering the entire Revolutionary War period. This book includes excellent maps to go along with an engaging narrative. This is a must have book for everyone's Revolutionary War library. -Brian P. Mack - The Fort Plain Museum and Historical Park

William “Larry” Kidder was born in California and raised in California, Indiana, New York, and New Jersey. He received his bachelor's and master's degrees from Allegheny College. A US Navy veteran with service in Vietnam, he considers teaching to be both his vocation and avocation, continuing in retirement after having taught for forty years in public and private schools. For thirty years, Larry has been a volunteer historian, interpreter, and draft horse teamster for Howell Living History Farm. He is active in central New Jersey historical societies and is an avid member of the Association for Living History, Farm, and Agricultural Museums (ALHFAM), the Washington's Crossing Roundtable of the American Revolution, the New Jersey Living History Advisory Council, and the Advisory Council for Crossroads of the American Revolution.

"The story of Revolutionary Princeton is an integral part of America's founding saga, and no one is better suited to tell that story than Larry Kidder. In addition to covering the salient events there during our struggle for independence, his narrative brings the reader face-to-face with the realities of everyday life in the eighteenth century and the challenges people endured at a time of great upheaval. This is an important addition to the literature of the Revolution and merits a wide readership."
— David Price, author of "John Haslet's World: An Ardent Patriot, the Delaware Blues, and the Spirit of 1776" and "The Road to Assunpink Creek: Liberty's Desperate Hour and the Ten Crucial Days of the American Revolution"