Race, Labor, and Violence in the Delta: Essays to Mark the Centennial of the Elaine Massacre (Paperback) 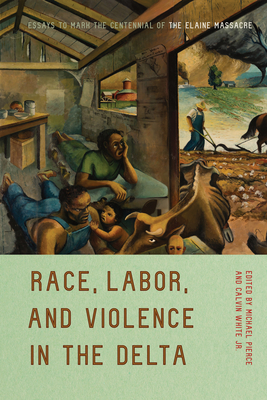 Race, Labor, and Violence in the Delta examines the history of labor relations and racial conflict in the Mississippi Valley from the Civil War into the late twentieth century. This essay collection grew out of a conference marking the hundredth anniversary of one of the nation’s deadliest labor conflicts—the 1919 Elaine Massacre, during which white mobs ruthlessly slaughtered over two hundred African Americans across Phillips County, Arkansas, in response to a meeting of unionized Black sharecroppers. The essays here demonstrate that the brutality that unfolded in Phillips County was characteristic of the culture of race- and labor-based violence that prevailed in the century after the Civil War. They detail how Delta landowners began seeking cheap labor as soon as the slave system ended—securing a workforce by inflicting racial terror, eroding the Reconstruction Amendments in the courts, and obstructing federal financial-relief efforts. The result was a system of peonage that continued to exploit Blacks and poor whites for their labor, sometimes fatally. In response, laborers devised their own methods for sustaining themselves and their communities: forming unions, calling strikes, relocating, and occasionally operating outside the law. By shedding light on the broader context of the Elaine Massacre, Race, Labor, and Violence in the Delta reveals that the fight against white supremacy in the Delta was necessarily a fight for better working conditions, fair labor practices, and economic justice.

Michael Pierce is associate professor of history at the University of Arkansas, Fayetteville. He is the author of Striking with the Ballot: Ohio Labor and the Populist Party.

Calvin White Jr. is associate dean of the Fulbright College of Arts and Sciences at the University of Arkansas, where he is also associate professor of history. He is the author of The Rise to Respectability: Race, Religion, and the Church of God in Christ.

“Essential reading for anyone seeking to understand the Elaine Massacre, the long record of white supremacist violence in the United States, and the legacy of resistance by Black Americans.”
—Jarod Roll, author of Poor Man’s Fortune: White Working-Class Conservatism in American Metal Mining, 1850–1950

“This ingenious collection of essays circles around the Elaine Massacre of 1919, taking the topics of violence, race, cotton plantations, labor, and law back to the 1880s and forward through the 1960s. Especially impressive are the ways the essays analyze strategies of resistance in Arkansas and Mississippi—from labor unions and fraternal organizations, to reform groups like the NAACP, to migration and public protest. Every essay is thorough and powerful.”
—Ted Ownby, author of Hurtin’ Words: Debating Family Problems in the Twentieth-Century South