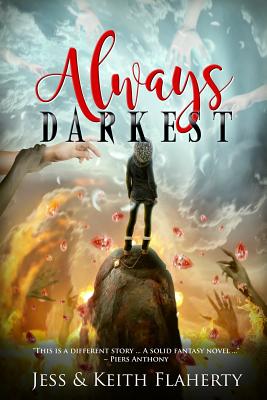 This is book number 1 in the Arbitratus Trilogy series.

Ronoven, a demon dreaming of an escape from Hell, finds an excuse for an extended vacation on Earth, where he pretends to be a young drifter called Ben. Everything is going great - until he meets Chris. This unassuming teacher is using an assumed identity, too. Cursed with immortality and named in a prophecy Ben thought was fake, Chris becomes an unlikely friend. Together the two of them discover the main subject of the prophecy, Mal, a young woman not only fathered by an angel, but also the last in the direct line of Jesus and Mary Magdalene. Mal learns her true identity but is determined not to be forced into a corner by circumstances or some ancient scrap of paper. Falling in love was never part of Ben's plan, but together he and Mal are drawn into conflict that could destroy them. Slippery ancient gods, as well as angels and their fallen siblings bring to bear all of their power to force Mal to their side. With the help of a small band of allies, Mal tries to shake free of the cage of prophecy and end Hell's hold on Ben. Will any of them find the future they desire?