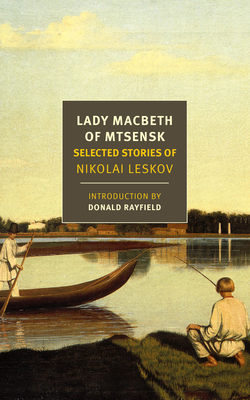 A new collection of the renowned Russian writer's best short work, including a masterful translation of the famous title story.

Nikolai Leskov is the strangest of the great Russian writers of the nineteenth century. His work is closer to the oral traditions of narrative than that of his contemporaries, and served as the inspiration for Walter Benjamin's great essay "The Storyteller," in which Benjamin contrasts the plotty machinations of the modern novel with the strange, melancholy, but also worldly-wise yarns of an older, slower era that Leskov remained in touch with. The title story is a tale of illicit love and multiple murder that could easily find its way into a Scottish ballad and did go on to become the most popular of Dmitri Shostakovich's operas. The other stories, all but one newly translated, present the most focused and finely rendered collection of this indispensable writer currently available in English.

Nikolai Leskov (1831-1895) was a novelist, short story writer, playwright, and journalist. He began his literary career in the early 1860s with the publication of his short story "The Extinguished Flame," the novellas Musk-Ox and The Life of a Peasant Woman, and his novel No Way Out. He is best known for his major works Lady Macbeth of Mtsensk, The Cathedral Clergy, The Enchanted Wanderer, and The Tale of Cross-eyed Lefty from Tula, and The Steel Flea.

Robert Chandler has translated many NYRB Classics, including Soul and The Foundation Pit by Andrey Platonov and Life and Fate and Stalingrad by Vasily Grossman. He lives in London.

Donald Rayfield is an emeritus professor of Russian and Georgian at Queen Mary University of London. He translated Nikolai Gogol's Dead Souls and Varlam Shalamov's Kolyma Stories and Sketches of the Criminal World.

“Certainly what impresses in Leskov is his all-seeing but unjudging eye. . . . Leskov is emphatically unlike either Tolstoy or Dostoyevsky, and bears only passing comparison with Turgenev. Rather, he emerges as a literary missing link, a writer who brings the metafictional playfulness of Sterne into the Russian tradition, melding this sophistication with his embrace of the folk tale and vernacular of the common people. Then, vitally, there is his legacy to Chekhov: a moral benevolence and humor-filled acceptance of the full range of humanity.” —Claire Messud, The New York Times

“Nikolai Leskov’s absence from classic Russian literature lists must end now! If you like Russian, and you like funny, you will love Leskov.” —Gary Shteyngart

“Stories as strong as fables and crazy as life.” —Alice Munro