The Corner That Held Them (Paperback) 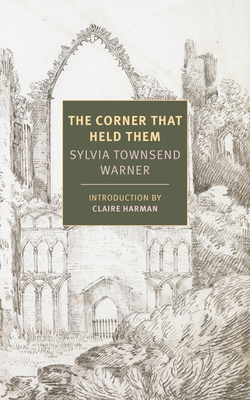 A unique novel about life in a 14th-century convent by one of England's most original authors.

Sylvia Townsend Warner’s The Corner That Held Them is a historical novel like no other, one that immerses the reader in the dailiness of history, rather than history as the given sequence of events that, in time, it comes to seem. Time ebbs and flows and characters come and go in this novel, set in the era of the Black Death, about a Benedictine convent of no great note. The nuns do their chores, and seek to maintain and improve the fabric of their house and chapel, and struggle with each other and with themselves. The book that emerges is a picture of a world run by women but also a story—stirring, disturbing, witty, utterly entrancing—of a community. What is the life of a community and how does it support, or constrain, a real humanity? How do we live through it and it through us? These are among the deep questions that lie behind this rare triumph of the novelist’s art.

Sylvia Townsend Warner (1893–1978) was a poet, short-story writer, and novelist, as well as an authority on early English music and a member of the Communist Party. Her first novel, Lolly Willowes (available from NYRB Classics), appeared in 1926 and was the first ever Book-of-the-Month Club selection. Over the course of her long career, Warner published six more novels, seven books of poetry, a translation of Proust, fourteen volumes of short stories, and a biography of T.H. White. NYRB also publishes her novels Mr. Fortune, Summer Will Show and The Corner That Held Them.

Claire Harman’s first book, a biography of Sylvia Townsend Warner, was published in 1989 and won the John Llewellyn Rhys Prize. She has since published biographies of Fanny Burney, Robert Louis Stevenson, Jane Austen, and Charlotte Brontë and has edited works by Stevenson and Warner. She was elected a Fellow of the Royal Society of Literature in 2006 and became President of The Alliance of LIterary Societies in 2016.

"Warner’s style is delicate and arch . . . Though she teeters on the edge of satire, she lands instead . . . on poignancy." —Josephine Livingstone, The New York Times Book Review

"One of the great British novels of the twentieth century: a narrative of extraordinary reach, power and beauty." —Sarah Waters

“In The Corner That Held Them, [Warner] has observed and blended the nice trivialities, the emotional upsets and the occasional spiritual reflections of the some fourteenth-century nuns. . . . The form of the novel is outwardly as ramshackle as the convent buildings . . . but this is a license that may be allowed to the charm, the wit and the speculation which make the book very remarkable.” —The Times Literary Supplement

“Sylvia Townsend Warner’s The Corner That Held Them strikes one as a masterpiece. As an act of imagined history—the life of a fenland nunnery in the fourteenth century—this novel has few rivals. Warner conveys the strange ordinariness of a distant yet immediate past with utter authority. But her chronicle of lives under pressure, at once visionary and petty, makes for a fiction of extreme density. No one after Hardy has interwoven more closely the sheer feel of material things, of weather, of light across water or foliage, with the inward landscapes of character. The prose precisely matches the theme and settings: it is at once bone-spare and of a rich, troubling opacity. A classic, whose resonance deepens inside the reader in proportion to its austere, luminous discretion. Also, as it happens, a work of high, frequent comedy.” —George Steiner, The Times Literary Supplement

“A spellbinding piece of historical fiction—spare, luminous. . . . One starts rereading as soon as one has reached the last page.” —The Sunday Times

“A magnificent recreation of the life of a medieval convent.” —The Daily Telegraph

“[The Corner That Held Them] renders the dailiness of life . . . plot is done away with; there’s no tidy narrative arc or chain of cause and effect. There’s only minutiae. . . It’s a world run by women, with its own rules and rhythms. But this can be suffocating. . . The convent is dedicated, with a wink from Warner, to the patron saint of prisoners.” —Claire Luchette, The New York Times