Down Below (NYRB Classics) (Paperback) 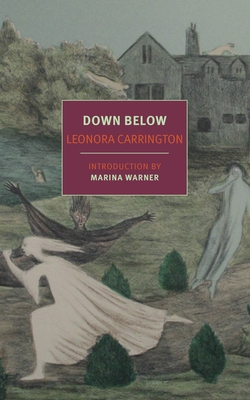 Carrington’s Down Below while unlike her eccentric fiction is itself a horrifically surreal memoir. After her lover the Surrealist Max Ernst is interned in a concentration camp, Carrington has a mental breakdown and is herself committed (by her family no less) to a vicious asylum in Spain. She lucidly describes not only her own mental state but also the terrible medical treatments she endured before her final escape with the help of her old nursemaid arriving via submarine, and her subsequent escape from her before making her way to North America where she would become one of Mexico’s greatest painters.

In 1937 Leonora Carrington—later to become one of the twentieth century’s great painters of the weird, the alarming, and the wild—was a nineteen-year-old art student in London, beautiful and unapologetically rebellious. At a dinner party, she met the artist Max Ernst. The two fell in love and soon departed to live and paint together in a farmhouse in Provence.

In 1940, the invading German army arrested Ernst and sent him to a concentration camp. Carrington suffered a psychotic break. She wept for hours. Her stomach became “the mirror of the earth”—of all worlds in a hostile universe—and she tried to purify the evil by compulsively vomiting. As the Germans neared the south of France, a friend persuaded Carrington to flee to Spain. Facing the approach “of robots, of thoughtless, fleshless beings,” she packed a suitcase that bore on a brass plate the word Revelation.

This was only the beginning of a journey into madness that was to end with Carrington confined in a mental institution, overwhelmed not only by her own terrible imaginings but by her doctor’s sadistic course of treatment. In Down Below she describes her ordeal—in which the agonizing and the marvelous were equally combined—with a startling, almost impersonal precision and without a trace of self-pity. Like Daniel Paul Schreber’s Memoirs of My Nervous Illness, Down Below brings the hallucinatory logic of madness home.

Leonora Carrington (1917–2011) was born in Lancashire, England, to an industrialist father and an Irish mother. She was raised on fantastical folk tales told to her by her Irish nanny at her family’s estate, Crookhey Hall. Carrington would be expelled from two convent schools before enrolling in art school in Florence. In 1937, a year after her mother gave her a book on surrealist art featuring Max Ernst’s work, she met the artist at a party. Not long after, Carrington and the then-married Ernst settled in the south of France, where Carrington completed her first major painting, The Inn of the Dawn Horse (Self-Portrait), in 1939. In the wake of Ernst’s imprisonment by the Nazis, Carrington fled to Spain, where she suffered a nervous breakdown and was committed to a mental hospital in Madrid. She eventually escaped to the Mexican embassy in Lisbon and settled first in New York and later in Mexico, where she married the photographer Imre Weisz and had two sons. Carrington spent the rest of her life in Mexico City, moving in a circle of like-minded artists that included Remedios Varo and Alejandro Jodorowsky. Among Carrington’s published works is a novel, The Hearing Trumpet (1976), and two collections of short stories. A group of stories she wrote for her children, collected as The Milk of Dreams, is published by The New York Review Children’s Collection; her Complete Stories is published by Dorothy, a Publishing Project in the United States and by Silver Press in the United Kingdom.

Marina Warner’s studies of religion, mythology, and fairy tales include Alone of All Her Sex: The Myth and the Cult of the Virgin Mary, From the Beast to the Blonde, and Stranger Magic (National Book Critics Circle Award for Literary Criticism; Truman Capote Prize). A Fellow of the British Academy, Warner is also a professor of English and creative writing at Birkbeck College, London. In 2015 she was given the Holberg Prize.

"In her centenary year, Carrington is undergoing a revival...Down Below is both a recollection of madness and a kind of transcription. Though Carrington completed it after the fact, her memoir hews closely to her thoughts and feelings as they were then.” —Anwen Crawford, The New Yorker

"So vivid is Carrington’s step-by-step descent into madness…it is possible to read Down Below in a single sitting, but emotionally quite difficult… [You] get the distinct impression that for Carrington, reality is malleable." —Carmen Maria Machado, NPR

"Down Below recounts Carrington’s incarceration in a Spanish asylum and her daring escape in a tone so cool that even the most harrowing details have a delayed effect on the reader, like the timed release of a potent drug. Her use of language is as precise as an artist’s choice of line or color, which helps her express the inexpressible." —Carol Cooper, The Village Voice

“[B]rief and unflinchingly honest...a candid, painful, and personal account of someone’s darkest hours...In a very helpful introduction to the book, novelist Marina Warner writes that Carrington was persuaded to write the memoir by surrealism’s literary founder, André Breton, who viewed her genuine, unaffected descent into true madness as surrealism at its most pure. As such, it seems a case can be made that this little book is indeed the gold standard of surrealist literature.” —Publishers Weekly

“Down Below is not only a radical reworking of the Surrealist narrative of female madness: it is a sophisticated experiment with reason, subjectivity and the narrative voice, in which Carrington is able to speak clearly of madness from the outside, to speak clearly of what is within it, of its ins and outs, without committing wholly to memoir or to art.” —Joanna Walsh, Verso Books (blog)

"Her stories are vivid, funny and surprisingly fresh...[they] combine satire with surrealist situations to deftly mock the pomposity of organized religion, sexual repression or the endless forms of bureaucratic hypocrisy and ineptitude... She controls her imagery, amuses us with her tweaking of the bourgeoisie and moves us with her dazzling dreamscapes, all the while firmly maintaining her slightly bemused sang-froid." —Richard Burgin, The New York Times

"While other Surrealists played at madness, she was intimate with it." —Peter Campbell, London Review of Books