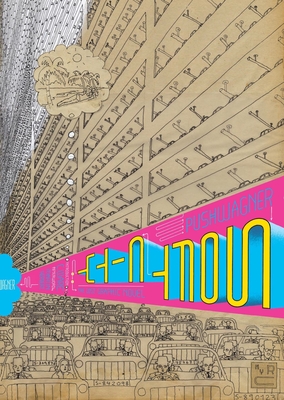 The legendary Norwegian pop artist Pushwagner’s scathing comics masterpiece—lost for decades, and never before published in the U.S.—is an epic vision of a single day in a world gone wrong: a brightly smiling, disturbingly familiar dystopia of towering skyscrapers, omnipresent surveillance, and endless distant war. “CLEAN BOMB THE HAPPY-HAPPY WAY,” blares the morning paper. “Heil Hilton!” barks an overlord on the news.

Welcome to Soft City. Now don’t be late for work.

This NYRC edition is a giant-sized hardcover extra-thick paper and spot-color throughout.

Hariton Pushwagner (Terje Brofos) was born in Oslo, Norway, in 1940. He studied at the School of Arts and Crafts and the Norwegian National Academy of Fine Arts. After graduating in 1966, he became a set painter for Norwegian state television, and in 1968 began collaborating with the Norwegian author Axel Jensen on a series of graphic novels and illustrations. In 1969, he started work on Soft City, which was completed in 1975 but then lost; it was rediscovered in Oslo in 2002. The original art for Soft City was exhibited both in the 2008 Berlin Biennial for Contemporary Art and the Sydney Biennial. Pushwagner’s work has been displayed in galleries and museums all over the world, including in New York, Berlin, Sydney, Paris, and London.

Chris Ware is the author of Jimmy Corrigan: The Smartest Kid on Earth and Building Stories, which was deemed a Top Ten Fiction Book of the Year by The New York Times and Time magazine. A contributor to The New Yorker, his work has been exhibited at the MoCa Los Angeles, the MCA Chicago, and the Whitney Museum of American Art.

Martin Herbert is associate editor of ArtReview and a regular contributor to Artforum, frieze, and Art Monthly. His monograph Mark Wallinger was published in 2011.

"Created by the Norwegian artist Hariton Pushwagner between 1969 and 1975, then unseen for decades, the astonishing cartoon treatise SOFT CITY has finally arrived in the United States. Its oversize pages depict city life as an identity-annihilating, cookie-cutter horror, observed by a baby named Bingo." – Douglas Wolk, The New York Times Book Review

"This lost work, now published in an oversize hardback edition, comes as an aesthetic revelation...Echoing Ulysses in its one-day structure, and Kafka in its humorous yet cutting condemnation of bureaucratic systems, this book sweeps up the reader in vast yet minimalist panoramas emphasizing the visual monotony of tasks such as going to work and buying one’s daily bread...this book will delight fans of experimental and visually lush graphic novels.” —Publishers Weekly, starred review

"Soft City is a compelling storehouse of midcentury anxieties. Even if these anxieties are no longer quite the same—if we now inhabit a world in which the absence of work is more terrifying than its overbearing presence—there is still value to Pushwagner’s vision…Soft City turned an era’s apprehensions into art." —Brad Prager, Los Angeles Review of Books

“The images are simple, but there’s something seething behind them, perhaps the passion of an artist possessed of true vision…fans of indie books and art lovers will embrace this as a masterpiece.” –Tom Batten, Library Journal

“…Pushwagner completes the subversive complex of his work, upending and overturning his readers with both the verbal and the visual. As a result, Soft City is as sumptuous as it is overwhelming: a vision of things to come that is more frightening for what it tells us about the world we already live in.” —Shea Hennum, A.V. Club

“Pushwagner built Soft City on repetition, and repetition is Pushwagner’s genius…on its surface, the comic shows an impersonal day in the life of the inhabitants of Soft City, a dense, highly regimented metropolis, but beneath, Pushwagner’s opus reads like a dream casting back at a horrible, cold reality.” —Hayden Bennett, Art in America

“Another remarkable rescue by the New York Review Comics… One of the best representations of urban alienation in comic form, with soft and liquid lines serving as metaphors of the conformism that creeps under the skin of modern man.” —Just Indie Comics

“…One of the more unusual and remarkable stories in the history of comics.” —Rob Clough, High-Low

“Soft City is broad and booming…the pages are often very impressive in the ‘god, look at that’ sense.” —Joe McCulloch, The Comics Journal

“It’s an absolute masterpiece of comics, and looks as if it was drawn yesterday.... It uses the medium of comics to express something profound and complicated.... The book was a revelation to me, and trumps pretty much every underground comic published in America at the same time.” —Chris Ware

“Pushwagner’s Magnum Opus, the graphic novel Soft City, is as feverish as a nightmare acid trip.” —The Guardian

“Its rediscovery and rescue...confirm how timely and timeless Soft City was, and still is. Prepare to be astonished.” —Paul Gravett, author of 1001 Comics You Must Read Before You Die