Fridays with the Wizards (Tuesdays at the Castle) (Paperback) 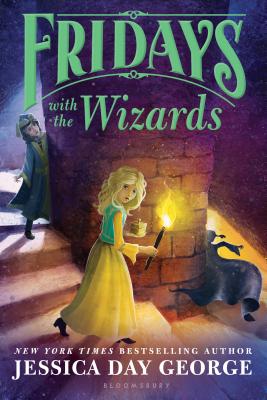 Fridays at Castle Glower are about to get interesting! With newborn griffins hatching left and right, new Castle passageways to explore, and an out-of-the-blue wedding to plan, life is as exciting as ever for Celie, Lilah, and Rolf. But when the dangerous, ancient wizard Arkwright escapes from the dungeon, no one can rest until he is found. Celie has an idea of where he may be hiding, but the only way to stop him could be to erase parts of the Castle for good. With danger lurking behind every tapestry and under every trapdoor, can Celie outsmart Arkwright fast enough to save her family and Castle Glower?

Jessica Day George is the author of many books for young readers, including the wonderfully whimsical Tuesdays at the Castle and three books in the Dragonskin Slippers series. Before becoming a full-time writer, she worked as a librarian and bookseller. Jessica lives with her family in Salt Lake City, Utah.
To find out more, visit www.jessicadaygeorge.com.

Jessica Day George studied at Brigham Young University where she enjoyed classes in pottery-making and Old Norse, and dutifully forced herself to sit through biology and math.  Originally from Idaho, she now resides in Salt Lake City, Utah, with her husband, their young son, and a five pound Maltese named Pippin.

“Lovely and engaging, this fantasy series continues to have wide appeal.” —Booklist on THURSDAYS WITH THE CROWN

“Fans of the series will eagerly devour this latest installment.” —SLJ on THURSDAYS WITH THE CROWN

“A sweet, funny, sincere story in which siblings work together.” —Kirkus Reviews on WEDNESDAYS IN THE TOWER

“Castle Glower is the true star of this charming story of court intrigue and magic. A satisfying mix of Hogwarts and Howl's Moving Castle.” —SLJ on TUESDAYS AT THE CASTLE

“This enjoyable romp turns mischief into political action and a stone palace into a cunning character. . . . These kids are clever, as is George's adventure. May pique castle envy.” —Kirkus Reviews on TUESDAYS AT THE CASTLE