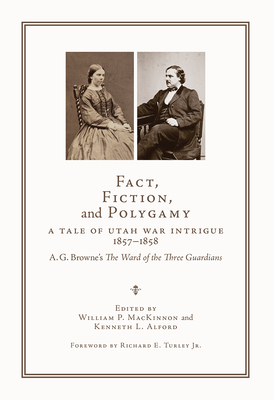 Fact, Fiction, and Polygamy rescues an exciting true tale of international intrigue from 150 years of neglect. It tells of the travails of Henrietta Polydore, a young Anglo-Italian girl spirited out of an English Catholic convent school in 1854 and bundled across the Atlantic, the Great Plains, and the Rocky Mountains by her Mormon-convert mother and aunt to live in Salt Lake City under an alias in the polygamous household of a Latter-day Saint leader with five wives and twenty children. Midway through Henrietta’s secret sojourn in the City of the Saints, she was caught up in the Utah War of 1857–1858, President Buchanan’s attempt to suppress a perceived Mormon rebellion with nearly one-third of the U.S. Army. MacKinnon and Alford present Henrietta’s story through their editing for twenty-first-century readers of a “lost” non-fiction novel about Polydore’s saga published during 1877 in Boston’s Atlantic Monthly. This short piece—dubbed a “novella” and titled The Ward of the Three Guardians—was the work of Albert G. Browne, Jr., a Boston Brahmin with two Harvard degrees and a Ph.D. from the University of Heidelberg, who, at age twenty-three, was in Utah as the war correspondent for Horace Greeley’s New-York Tribune. Browne reported on and then became part of Henrietta’s story using his legal training to bring about her repatriation to her father in England through a sensational legal case. Her return home precluded an early, perhaps polygamous, marriage as a teenager.

Fact, Fiction, and Polygamy is the work of two historian-editors with disparate backgrounds working collaboratively as professional colleagues as well as personal friends. MacKinnon, an independent historian from upstate New York now living in California, is a Presbyterian, veteran of the U.S. Air Force, and former vice president of General Motors Corporation. Colonel Alford, a Latter-day Saint and Utahn, is a professor teaching at Brigham Young University after a thirty-year career as a U.S. Army officer with teaching assignments at the U.S. Military Academy and National Defense University. MacKinnon and Alford have brought their decades of research on the subject to bear on a re-publication of Ward that helps readers separate Browne’s telling of Henrietta’s story into its strands of fact and fiction.

Sit back and savor Albert Browne’s newly recovered tale and its rich blend of fact and fantasy. With the guidance of editors MacKinnon and Alford, determining the difference is half the fun and much the value of revisiting The Ward of the Three Guardians.

Number Seventeen in the Series Utah, the Mormons, and the West Tanner Trust Fund and J. Willard Marriott Library

“With nearly a century of Utah War studies between them, these two scholars are ideally suited to have spotted Ward, recognized it as the gem it is, and positioned it for use by those of us seeking . . . a good tale of the American West.”—Richard E. Turley Jr., from the Foreword