Expect More!: Dare to Stand Up and Stand Out (Hardcover) 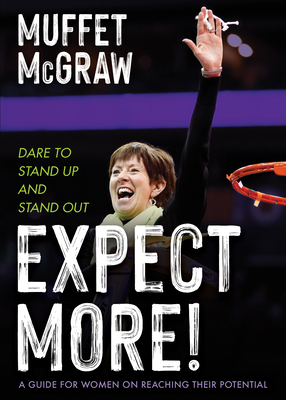 Muffet McGraw retired in 2020 after thirty-three years as head coach of the University of Notre Dame women's basketball team. With an overall record of 936-293, she led the Irish to two national championships (2001, 2018). McGraws's teams appeared in twenty-six NCAA tournaments, including seventeen Sweet Sixteens, nine Final Fours, and seven championship games.Among her many honors, McGraw ranks first on the all-time wins list among single-sport coaches in the history of Notre Dame athletics. She is a three-time consensus NCAA coach of the year and a seven-time conference coach of the year. In 2017, McGraw was inducted into the Naismith Memorial Basketball Hall of Fame--the thirty-second woman member and thirteenth female coach. She received the 2017 Legends of Coaching Award from the John R. Wooden award committee.A native of West Chester, Pennsylvania, McGraw earned her bachelor's degree in sociology from Saint Joseph's University in 1977.McGraw and her husband Matt live in Granger, Indiana. They have a son, Murphy, and a daughter-in-law Francesca.