Twenty-Percent Soldiers: Our Secret Life in the National Guard (Hardcover) 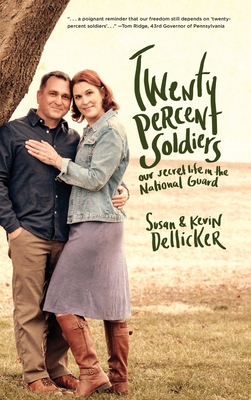 ". . . a poignant reminder that our freedom still depends on 'twenty-percent soldiers' who volunteer to protect and defend our nation when duty calls."
-Tom Ridge, 43rd Governor of Pennsylvania, First US Secretary of Homeland Security

The National Guard and Reserves is comprised of remarkable men and women who work behind the scenes as our nation's supplemental fighting force. It's a part-time job with a full-time commitment that involves the entire family. They wear the same uniforms and train to the same standards as America's full-time military. And when called to service, they fight right alongside the active duty. Nobody knows the difference. Yet they are very different.

Twenty-Percent Soldiers is the true account of one couple's life in the National Guard through eighteen years of part-time warfare. With humor and humility, Kevin and Susan Dellicker portray what it's like to jump back and forth between having a "normal" civilian life in small-town Pennsylvania and conducting special operations missions in Southwest Asia. A tribute to all the part-time soldiers and their families who have been fighting the Global War on Terrorism since 9/11, this story is also a call-to-action for politicians and military leaders to fix a broken family support system that is failing the part-time force.

Twenty-Percent Soldiers reinforces a truth that all Americans can embrace: With perseverance, love and faith, ordinary people can accomplish extraordinary things.