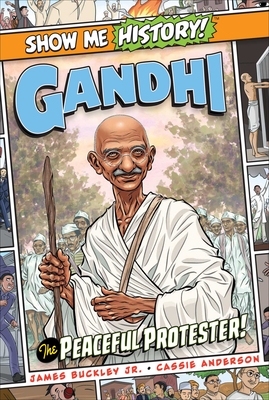 Mahatma Gandhi inspired a nation and generations of social reformers with his emphasis on kindness and nonviolence—discover how one man changed the lives of millions in this illustrated and kid-friendly biography.

This biography of Mahatma Gandhi is presented in a graphic novel format, making it accessible and entertaining for readers across a range of age groups. After being named president of the Indian National Congress in 1921, Gandhi was instrumental in gaining India’s independence from Great Britain by using nonviolent resistance—and in the process he inspired generations of civil rights leaders with his example. Gandhi: The Peaceful Protester! recounts this humble leader’s story, from his youth in western India through his years as a lawyer and political activist who practiced kindness and empathy toward everyone.

James Buckley Jr. is a prolific author of nonfiction for young readers, with more than 150 books to his credit (and still typing!). He is the author of more than a dozen titles in The New York Times' best-selling "Who Was...?" biography series, including the Wright Brothers, Milton Hershey, Betsy Ross, Jules Verne, and Blackbeard. Buckley has written more than thirty DK Readers on a wide variety of topics, plus two recent long-form bios of Adolf Hitler and Bonnie and Clyde for Aladdin Books. For Spring 2019, he created the first book in a new series for Aladdin—a bio of astronaut Michael Collins. Buckley is the co-author of Time Inc./Liberty Street's "X-Why-Z" series and wrote and produced the Animal Planet Animal Atlas for Liberty Street. A former editor at Sports Illustrated and the National Football League, he lives in Santa Barbara, California, where he runs a successful book producing company.

Cassie Anderson is a freelance artist based in Portland, Oregon. She is the creator behind the webcomic-turned-graphic novel Extraordinary: The Story of An Ordinary Princess, as well as the artist and letterer on the Lifeformed series, a sci-fi YA comic about growing up and doing hard things set in an alien invasion. Both books are published by Dark Horse Comics. She also enjoys making journal and autobiographical comics about her life. When she's not drawing comics, Cassie can be found baking tasty treats or exploring the great outdoors.