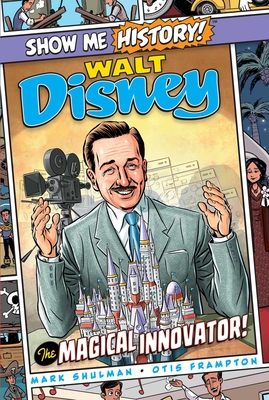 From his early upbringing in the Midwest to finding success in Hollywood, Walt Disney: The Magical Innovator! tells the story of the man who transformed the film and entertainment industry with animated characters such as Mickey Mouse, Donald Duck, and Snow White. In this full-color illustrated biography presented in graphic novel format, key moments in Walt Disney’s career are brought to life, including his first forays into illustration as a teenager, his bold decision to produce the world’s first full-length animated film, and his vision of Disneyland. Historically accurate text that informs readers of Disney’s upbringing and long road to becoming a prominent entrepreneur makes this book not only entertaining but educational as well.

Mark Shulman has written more than 150 books for kids of all ages, including illustrated stories for Marvel Comics, Scholastic, Chronicle Books, Simon & Schuster, and more. Their subjects include The Incredible Hulk, Madagascar, Shamu the orca, The Amazing World of Gumball, and others. Mark started reading comics when they cost just 15 cents and hasn't stopped. He's still got Silver Surfer #1 in very fine condition, and he's not letting it go.

Otis Frampton is a comic book writer and artist. His creator-owned graphic novel series Oddly Normal is published by Image Comics. His most recent work includes illustrating a series of children's books for DC Comics/Capstone Books and writing and drawing a story for IDW Publishing's all-ages comic book series, Star Wars Adventures. He is also one of the artists on the popular animated Web series, How It Should Have Ended. His illustration clients include StarWars.com, Topps Trading Cards, and Upper Deck Entertainment.

John Roshell is a co-founder of Comicraft, the lettering and design studio best known for pioneering the process of digitally lettering comic books. He has lettered thousands of comics for Marvel, DC, Dark Horse, Blizzard, and more; created hundreds of typefaces widely used in comics and video games; and designed loads of logos for franchises like the Avengers, Daredevil, Black Panther, and Angry Birds. He lives in Santa Barbara with his wife Starshine, two boys, and a somewhat ugly dog.