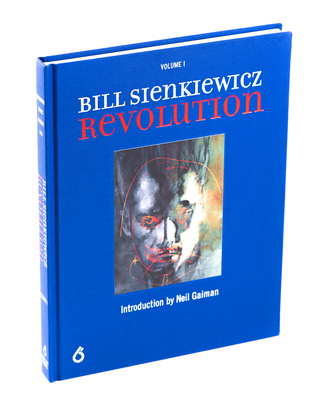 "Astounding... extraordinary... Jumping between highlighting his indie cult status as an artist and the mindset behind the abstraction of some of comics most beloved characters, the collection ultimately acts as a stunning visual love letter to one of comics most revered artists." -- Comics Beat

Bill Sienkiewicz (pronounced sin-KEV-itch) is an Eisner-winning, Emmy-nominated artist best known for revolutionizing the way comic books are drawn and made. His work has graced the National Museum of Fine Arts in Rio de Janeiro, Brazil; art galleries in Paris, Barcelona, and Tuscany; and advertising campaigns for Nike, MTV, Nissan, the 2006 Winter Olympics, and dozens of Hollywood movies. Sienkiewicz is a classically trained painter whose artworks incorporate abstract and expressionist influences and combine oil painting, acrylics, watercolor, mixed media, collage, and mimeograph.

Bill Sienkiewicz: Revolution is the first time the artist's work and career have been taken out of the context of comic books and evaluated as fine art. Ben Davis, award-winning Senior Writer for Artnet News, considers Sienkiewicz's process and places him within the context of art and popular culture. Edited by Sal Abbinanti, Sienkiewicz's representative and colleague for 12 years, Bill Sienkiewicz: Revolution features an introduction by Neil Gaiman, who collaborated with Sienkiewicz on the New York Times bestseller The Sandman, and an interview in which the artist explains his influences and techniques and offers his view on the future of comic book art. The book is covered in luxurious 100% cloth fabric, with two embossed, tipped-in images on the front and back cover.

Ben Davis is Senior Art Critic for Artnet News, the most widely read art publication in the world. He is the author of 9.5 Theses on Art and Class (Haymarket, 2013) and the editor of The Elements of Architecture (Taschen, 2018). Recent essays by Davis have appeared in the books Public Servants: Art and the Crisis of the Common Good (MIT Press, 2016) and The Future of Public Space (Metropolis, 2018). His writings have been featured in New York, New York Times, Slate, The Village Voice, and many other publications. He lives in Brooklyn, New York. Neil Gaiman is the author of short fiction, novels, comic books, graphic novels, audio theatre, and films. He is best known for his best-selling comic book series The Sandman and novels Stardust, American Gods, Coraline, and The Graveyard Book.