Like a River to the Sea: Heartbreak and Hope in the Wake of United 93 (Hardcover) 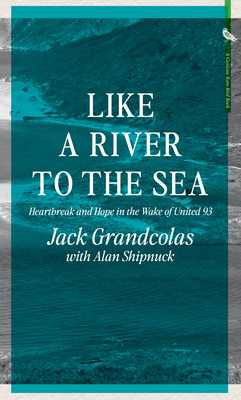 The story of heartbreak to triumph in the wake of a tragedy.
Their first date in college was a U2 concert and after that Lauren and Jack Grandcolas were inseparable. He was mesmerized by her sweetness, fierce intelligence and eyes that were as blue and alive as the ocean. They married and settled in San Francisco, each pursuing their dreams in the business world. After a decade of trying, Lauren finally got pregnant at the age of thirty-eight. On September 6, 2001, she flew to New Jersey--her beloved Little Grandma had died and following the funeral Lauren shared the joyous news of her pregnancy to lift her family's spirits. Flying home to Jack on September 11th, she arrived at Newark airport early and walked on to a flight for which she hadn't been ticketed: United 93. During that terrifying flight, Lauren left a calm and reassuring voice mail for Jack which remains a testament to her courage and selfless love, even in the face of her own mortality. Like a River to the Sea is a story of love overcoming loss. In this moving memoir, Jack Grandcolas brings to life his college sweetheart while taking the reader through his long journey to make peace with the loss of Lauren and their unborn child. Jack is honest about the depth of his despair and his battles with depression, PTSI, and heavy drinking. As he digs himself out of the deepest hole imaginable, Jack learns universal truths that will help anyone confronted with tragedy. Like a River to the Sea is also a deeply personal look at an event of historical importance. Jack takes us inside the White House to meet with President Bush and to the precipice of a still-smoldering hole in the earth outside of Shanksville, Penn. The book goes aboard United 93 in its final minutes, when this brave collection of Americans fought to retake control of the plane, ultimately preventing the hijackers from completing their mission and becoming the first heroes in the war against terror. As with Jack's life, Like a River to the Sea is defined by the boundless depths of human love. Eighteen years after losing his wife and their unborn baby, Jack finally remarried, and his new bride so honors the love between him and Lauren that her wedding ring includes stones that Lauren once wore on her finger. This is the magic of Like A River To The Sea, which begins with heartbreak but becomes a story about the triumph of the human spirit.

Born and raised the youngest of six kids in the Midwest, Jack Grandcolas went to college at The University of Texas to play golf. There he met Lauren Catuzzi. Jack graduated and embarked on a successful marketing and advertising career in San Francisco. In 1991, he married Lauren and moved to Marin county to start a family. Lauren, three months pregnant with their first child, was killed when they stopped United Flight 93 from being used by terrorists to torpedo the United States Capital. Jack has remarried and currently does pro bono work for charities and serves on a few boards. Alan Shipnuck wrote his first Sports Illustrated cover story as a twenty-year-old intern, in 1994. Over the ensuing quarter-century he typed covers on subjects ranging from Tiger Woods to Brett Favre to Michael Phelps to Peyton Manning to Dwayne "The Rock" Johnson to Phil Mickelson. Shipnuck is now a partner and the executive editor at the Fire Pit Collective, a new media company. He recently won his 12th first-place award in the annual writing contest of the Golf Writers Association of America, breaking the all-time record of World Golf Hall of Fame member Dan Jenkins. Shipnuck is the author of eight books, including national best-sellers Bud, Sweat & Tees and The Swinger (with Michael Bamberger) and the most anticipated and impactful sports book of recent years, Phil: The Rip-Roaring (and Unauthorized!) Biography of Golf's Most Colorful Superstar. He lives in Carmel, California.