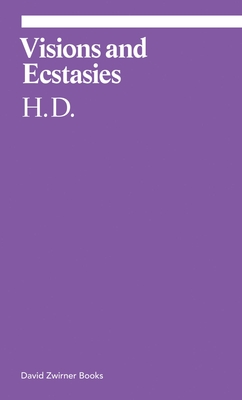 By H.D., Michael Green (Introduction by)
$12.95
Click Title for IN STOCK Location

H.D’s writing continues to inspire generations of readers. Bringing together a number of never-before-published essays, this new collection of H.D.’s writings introduces her compelling perspectives on art, myth, and the creative process.

While H.D. is best known for her elemental poetry, which draws heavily on the imagery of natural and ancient worlds, her critical writings remain a largely underexplored and unpublished part of her oeuvre. Crucial to understanding both the formative contexts surrounding her departure from Imagism following the First World War and her own remarkable creative vision, Notes on Thought and Vision, written in 1918, is one of the central works in this collection. H.D. guides her reader to the untamed shores of the Scilly Isles, where we hear of powerful, transformative experiences and of her intense relationship with the paintings of Leonardo da Vinci. The accompanying essays, many published here for the first time, help color H.D.’s astute critical engagement with the past, from the city of Athens and the poetry of ancient Greece. Like Letters to a Young Painter (2017), also published in the ekphrasis series, this collection is essential reading for anyone interested in the creative process.

Born Hilda Doolittle, H.D. (1886–1961) was a poet and novelist notably associated with Imagism, an avant-garde literary movement that emerged in London during the early twentieth century. Her first, and perhaps best known collections of poetry, Sea Garden (1916) and The God (1917), exemplify the precise imagery and sharp language favoured by Imagism and her contemporaries Ezra Pound and William Carlos Williams. H.D.’s writing was often deeply personal, merging her unstable personal life, marred as it was with frequent illness and loss, with the evocative images and stories of the ancient world. Together with her lifelong companion Bryher, she travelled throughout Europe, in particular to Greece and Egypt, sites steeped in the mythology of old that would continue to inspire her late into her life and that would have a profound impact on her final poems, such as the revisionary epic Helen in Egypt (1961). Though somewhat overshadowed by her contemporaries in historical and critical accounts of the male-dominated modernist movements, H.D. is considered one of the most important and inimitable writers of her time.

Michael Green is a Wolfson Scholar and PhD research student in the Department of History of Art at University College London. He works within the intersections of art, literature, and psychoanalysis, and his current research is specifically engaged with how H.D.’s writings have been used in contemporary art practices.

“The books in the series seem designed to slip into your back pocket —slim, spartan, and compact, sporting uniform covers consisting solely of typeface in black or white, with a matching horizontal bar across the top, against a solid color.”
— Thomas Micchelli