Kurt Vonnegut: The Making of a Writer (Hardcover) 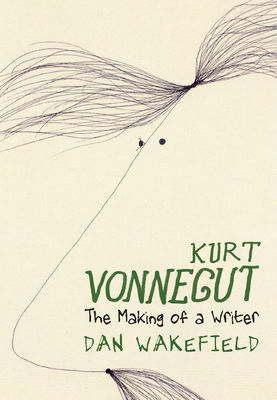 The first and only YA biography of the great American novelist and humanist comes out on the 100th anniversary of his birth.

Kurt Vonnegut, author of Slaughterhouse Five, Breakfast of Champions, Cat's Cradle, and many other brilliant novels and short stories, is one of our greatest American writers, often using science fiction, humor, and a humanist view of society, religion, politics, and human nature in his writing to show us the absurdity and the loveliness of life on earth. Born in 1922, Vonnegut's life was full of great fortune and great despair: his family was wealthy, but lost everything in the market crash of 1929; he was the youngest son in a loving family, until his mother fell into a depression and committed suicide; he joined the army in WWII with great pride for our country, but experienced instead a world of destruction and horror. These and many others were the experiences that made him a writer. But how did he channel the highs and lows of his life into great writing?

Dan Wakefield, a friend and mentee of Vonnegut's for decades and a fellow Hoosier, distills the facts including Kurt's novels, essays, interviews, letters and personal experiences, into a beautiful telling of the making of a writer. Using the second person "You," it is as though Wakefield is a friend walking through Kurt's life alongside him, a guide for readers to his extraordinary life. Here is an American life, a burgeoning artist's life to inspire anyone who has read Vonnegut's work or who themselves aspire to write.

Dan Wakefield is a novelist, journalist, and screenwriter. Born in Indianapolis, Indiana, he was an Eagle Scout and began his writing career as a columnist of his high school newspaper, The Shortridge Daily Echo. Shortridge High was also the school Kurt Vonnegut had graduated from a few years earlier. They didn't know each other at the time, but eventually they met and became lifelong friends.
Dan has served as a sports correspondent and writer for a number of magazines and newspapers including Harpers, Atlantic Monthly, and The New York Times Magazine. His best-selling novels Going All The Way and Starting Over were made into feature films, and a documentary film was produced of his memoir New York in the Fifties. He splits his time between Indianapolis IN and Miami FL.

"It’s not only young adults who will get a kick out of the book. You will, too . . . You get the idea that Mr. Wakefield’s account of Vonnegut’s life is funny and tender, the kind of book that will leave you bruised and happy and reverberating a little, as if you are a piano that someone has just finished playing. . . .What really strikes you, though, is that the reviewer is addressing you directly, using the second person, in the present tense. ... it works like a dream. The style Mr. Wakefield uses has the effect of turning Vonnegut (1922-2007) into your intimate friend."
—Meghan Cox Gurdon, Wall Street Journal

"Dan Wakefield has delivered Kurt Vonnegut to a new generation of readers. During the Vietnam war years Vonnegut  was regarded as a truth-teller by young students who gulped down his novels. As Wakefield puts it, 'He said things that other people thought but didn’t’ say or hadn’t dared to think but recognized as true when they heard them.' This book is especially important to anyone who aspires to be a writer. Vonnegut was more than merely gifted: he was dogged. In 1992, when he was 70, Vonnegut said, 'It has always been the case with me that when my life is a mess I can find some relief by writing.' Vonnegut’s good friend Dan Wakefield knew him as did few others; and he has done us all a favor with this detailed biography of this fearless writer."
—Phillip Hoose, winner of the National Book Award for Young People's Literature

"A penetrating view of the life, work, and character of a renowned writer, artist, playwright, and countercultural icon ... Sympathetic, authoritative, and readable."
—Kirkus Reviews

"I love the tone the second person gives the story. There's something intimate and warm about it. It says I see you and I understand you. The thing that students love about Vonnegut is the humor but also the moral compass, the humanity and this book shows where it comes from."
—Susan Neville, Butler University