The Censor's Notebook: A Novel (Paperback) 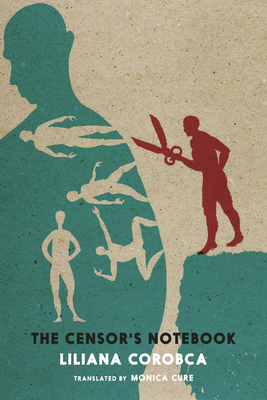 A fascinating narrative of life in communist Romania, and a thought-provoking meditation on the nature of literature and censorship.

A Censor’s Notebook is a window into the intimate workings of censorship under communism, steeped in mystery and secrets and lies, confirming the power of literature to capture personal and political truths.

The novel begins with a seemingly non-fiction frame story—an exchange of letters between the author and Emilia Codrescu, the female chief of the Secret Documents Office in Romania’s feared State Directorate of Media and Printing, the government branch responsible for censorship. Codrescu had been responsible for the burning and shredding of the censors’ notebooks and the state secrets in them, but prior to fleeing the country in 1974 she had stolen one of these notebooks.

Now, forty years later, she makes the notebook available to Liliana, the character of the author, for the newly instituted Museum of Communism. The work of a censor—a job about which it is forbidden to talk—is revealed in this notebook, which discloses the structures of this mysterious institution and describes how these professional readers and ideological error hunters are burdened with hundreds of manuscripts, strict deadlines, and threatening penalties. The censors lose their identity, and are often frazzled by neuroses and other illnesses.

LILIANA COROBCA is a writer and researcher of communist censorship in Romania. She was born in the Republic of Moldova and is the author of the novel Negrissimo (2003), winner of the ‘Prometheus’ Prize for debut fiction. She is also the author of the novels A Year in Paradise (2005), Kinderland (2013), and The Old Maids’ Empire (2015). She has received grants and artists’ residencies in Germany, Austria, France, and Poland.

MONICA CURE is a Romanian-American writer, translator, and dialogue specialist, as well as a two-time Fulbright grant award winner. Her poetry and translations have been published in journals internationally, and she’s the author of the book Picturing the Postcard: A New Media Crisis at the Turn of the Century (University of Minnesota Press). She is currently based in Bucharest.

"Below the humorous surface The Censor's Notebook is a complex, multilayered and multidimensional novel in which fact and fiction are cleverly entwined"—Times Literary Supplement

“Corobca’s novel should not be categorized as eastern European interest or communist history, but as an object lesson for our increasingly complex information age.” —Financial Times

"Even a censor would have to agree this makes for essential reading."
—Publishers Weekly, starred review

"The fictional censor of The Censor's Notebook creates a masterpiece of repression—both the sinister governmental kind and the welcome capacity to repress trauma. The tension that results will have you questioning your own successes as triumphs of self-censorship. A profound and playful novel."
— Nell Zink

"Moldovan author Liliana Corobca has extensively studied censorship under the Romanian communist regime, and she used this considerable expertise in crafting her 2017 novel The Censor’s Notebook, a riveting imagining of one of those missing historical records. . . . Impressive. . . . What makes the novel remarkable, however, is Filofteia’s sorrowful life story, her conflicted attitudes toward her job and her coworkers, and Corobca’s startling illumination of the expansive and sinister extent of censorship, not just in communist Romania but anywhere that seeks to control words, thoughts, and deeds. . . . Ingeniously structured"
— Cory Oldweiler, LA Review of Books

"In The Censor’s Notebook, Romanian author Liliana Corobca also probes political repression. Framed around a former censor who donates a stolen notebook from 1974 to a new museum of communism, the novel opens a window onto the secretive world of censorship during that era in Romania. 'The story is so multilayered,' says translator Monica Cure. 'It’s a kind of hodgepodge of notes the censor has taken, fragments of different novels and poems, all made up by the author but presented as if they were found.' Cure, whose grandfather was imprisoned and who herself was a refugee from the Communist regime in Romania, adds that translating the novel gave her a deeper appreciation for the importance of protecting freedom of expression. 'It’s healthy to be able to talk about censorship, which is basically the illegitimate silencing of voices. Legitimacy is what we as a community decide on. What we get to do in a democracy is decide on what voices have been wrongly silenced.'"
— Publishers Weekly, story on "Pushing Boundaries: Literature in Translation"

"The novel is a tour de force through its courage in tackling a subject such as this one, as well as through its craft and style in creating a narrative voice which is believable, authentic, and symbolic all at the same time."
— Dorica Boltașu Nicolae in Observator Cultural, Romanian literary and cultural magazine

"Liliana Corobca has written a complex and memorable novel whose main character (a “negative” one at first) is “humanized” through a powerful personal story…a communist biography par excellence."
— Michael Astner in Ziarul de Iași, the main newspaper of the city of Iași

"Censorship here is interiorized, it no longer acts upon a text written by someone else, but on the self who reads. It no longer consists in the cutting out of words, but in adding the most appropriate ones. Censorship is activated by what is missing, not what is already in the text. Through having to supplement what the author didn’t write, the censor herself is censored rather than the author…. Liliana Corobca’s new novel is the story of literature’s own self-consciousness and proof that it is possible, even when subject to censorship. It is an original and persuasive one."
— Adrian Romila in Romania literara, the official magazine of the Writers' Union, originally founded in 1855.

"The novel The Censor’s Notebook by Liliana Coroba is one of the few books written after the Romanian Revolution that has managed to capture the structure of totalitarianism in all its aspects."
— Șerban Axinte in Astra Magazine, a Romanian literature and history magazine

"Liliana Corobca is a well-known novelist and researcher of Eastern-European communism, whose books have vividly reconstituted the recent histories of countries such as Romania and Moldova before and after the fall of the Berlin Wall in 1989. Her novel The Censor's Notebook offers a complete fresco of what censorship meant during the terror, fear, and social control of Ceausescu's totalitarian regime in Romania in the 1970s. Its main character, censor Filoftea Moldovean, is a unique voice in Romanian literature. Through her, the Western reader will be able to (re)live the complex thoughts and feelings related to institutional censorship and self-censorship not only in Eastern Europe but in any country. These experiences are in fact relevant even for social contexts in which censorship seems not to exist. Written creatively, and full of surprising humor, it is a totally captivating book."
— Magda Carneci, poet and author of FEM