The Fourteen Holy Helpers: Invocations for Healing and Protection (Paperback) 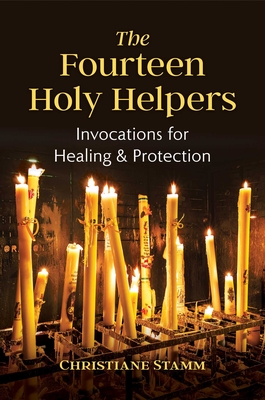 A step-by-step guide to calling on the Fourteen Holy Helpers for healing, success, guidance, and love

• Shares modern updated versions of the medieval prayers of the Holy Helpers, one prayer for each of the 14 saints and one prayer to call on all of them together

• Explains how, even though these 14 saints are connected to Catholic belief, they are universal in their powers of assistance and will come to the aid of anyone who calls on them

The art of invocation--calling on spirits and higher forces for assistance--has been practiced in folk magic traditions for centuries, with roots going back to early pagan and shamanic times. Called on for more than 1,000 years, the Fourteen Holy Helpers are a group of Catholic saints venerated together because their intercession has been shown to be particularly effective in difficult times. Although they are part of the Christian tradition, these spiritual helpers are universal in their powers of assistance and will come to the aid of anyone who calls on them.

In this guide to invoking the Fourteen Holy Helpers, Christiane Stamm presents modern updated versions of the medieval prayers of the Holy Helpers, which were transmitted to her directly from the spirit world. She explains how, even though these 14 saints are connected to Catholic belief, their invoked powers connect to the original energies dwelling within humans and the Earth and calling on them works as a form of natural magic. She shares short biographies of each saint and details how to access their powers of healing and protection through writing out and reciting their specific prayers during the full moon.

The author shares 15 prayers--one for each Holy Helper, used to support healing for specific ailments or issues, and one prayer that is especially powerful because it calls on all 14 Helpers together. For each prayer she recommends a healing stone that can be added to further enhance the effect. The author also explains how to use the prayers to create protective amulets for you and your home and write a letter of invocation for love and success.

Offering a step-by-step method to call for spiritual assistance, this book helps us realize the profound power of prayer and belief and reveals how magic still exists in our modern world.

Christiane Stamm works as a commercial trainer and relaxation educator. With the help of the spirit world, she has given the prayers to the Fourteen Holy Helpers a modern interpretation. She lives in the south of Germany.