The Rebel Bride (Daughters of the Mayflower #10) (Paperback) 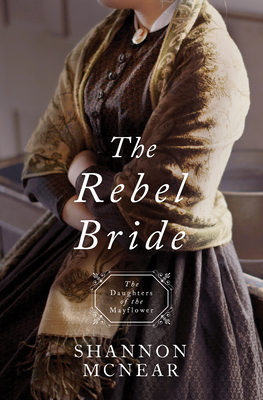 Can Love Form Amidst Tensions of War?
During the clash between Union and Confederacy, quiet Tennessean Pearl MacFarlane is compelled to nurse both Rebel and Yankee wounded who seek refuge at her family’s farm. She is determined to remain unmoved by the Yankee cause—until she faces the silent struggle of Union soldier Joshua Wheeler, a recent amputee. The MacFarlane family fits no stereotype Joshua believed in; still he is desperate to regain his footing—as a soldier, as a man, as a Christian—in the aftermath of his debilitating injury. He will use his time behind enemy lines to gather useful intelligence for the Union—if the courageous Rebel woman will stay out of the line of danger.

Join the adventure as the Daughters of the Mayflower series continues with The Rebel Bride by Shannon McNear.

Transplanted to North Dakota after more than two decades in Charleston, South Carolina, Shannon McNear loves losing herself in local history. She’s a military wife, mom of eight, mother-in-law of three, grammie of two, and a member of ACFW and RWA. Her first novella, Defending Truth in A Pioneer Christmas Collection, was a 2014 RITA® finalist. When she’s not sewing, researching, or leaking story from her fingertips, she enjoys being outdoors, basking in the beauty of the northern prairies. Connect with her at www.shannonmcnear.com, or on Facebook and Goodreads.

“The Rebel Bride is deftly woven with strands of dignity, thoughtfulness, and grace. With admirable attention to historical detail, Shannon McNear has given us a story of quiet determination set to a backdrop clamoring of war. Lovers of Civil War–era novels will appreciate the depth of character explored within these pages.”
–Jocelyn Green, author of the Heroines Behind the Lines Civil War series

“Shannon McNear has once again pierced through history, bringing the Civil War to life with accuracy and authenticity. The story of Pearl and Josh will haunt you like a melody carrying through time.”
–Denise Weimer, historical romance editor and author of The Georgia Gold Series, The Restoration Trilogy, and The Witness Tree

“A poignant peek into the harsh and complicated realities of the Civil War that will sometimes have you weeping and other times leave you with a smile. Either way, you will be touched. Another winner for author Shannon McNear.”
–Michelle Griep, Christy Award-winning author of the Once Upon a Dickens Christmas series

“Don’t miss The Rebel Bride! Through her wonderful lyric prose, Shannon McNear vividly paints the pain and conflict of the Civil War—and the ability of the human spirit to overcome heartache and adversity with deep and abiding love.”
–Jennifer Uhlarik, author of Sand Creek Serenade

“Shannon McNear riveted me from the first page. I love The Rebel Bride’s emphasis on obeying Jesus’ teaching to do good to your enemy no matter what the circumstances.”
–J. M. Hochstetler, author of the American Patriot Series and coauthor with Bob Hostetler of the Northkill Amish Series

McNear does a fine job of depicting the uneasiness of those who begin to comprehend the true nature of their lost cause, adding an emotional dimension to this hope-filled tale.
— Publishers Weekly