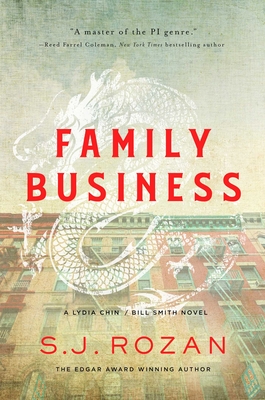 The death of a powerful Chinatown crime boss thrusts private eye Lydia Chin and her partner Bill Smith into a world of double-dealing, subterfuge, murder, and—because this is New York City—real estate in this new mystery by Edgar Award-winning novelist S. J. Rozan.

Choi has left the Tong headquarters building to his niece, who hires Lydia and her partner, Bill Smith, to accompany her to inspect it. The building is at the center of a tug-of-war between Chinatown preservation interests—including Lydia's brother Tim—and a real estate developer who's desperate to get his hands on it.

When Lydia, Bill, and Choi's niece go to the building, they discover the Tong members are equally divided on the question of whether the niece should hold onto the building or sell it—and make them rich. Entering Choi's private living quarters, they find the murdered body of Choi's chief lieutenant.

The battle for the building has begun. Can Lydia and Bill escape being caught in the crossfire?

S. J. Rozan is the author of Paper Son and many other crime novels. She has won multiple awards for her fiction, including the Edgar, Shamus, Anthony, Nero, and Macavity, the Japanese Maltese Falcon, and the Private Eye Writers of America Lifetime Achievement Award. S. J. was born and raised in the Bronx and now lives in lower Manhattan.

"Rozan’s series about Lydia Chin and Bill Smith has always stretched the boundaries of private detective mysteries, showing how these novels can delve into the issues that touch our lives. Family Business is a superior addition to an outstanding series."
— Oline Cogdill

"Rozan evokes the milieu perfectly, while smoothly integrating current debates over neighborhood development into an intricate plot. This is another triumph for this talented author."
— Publishers Weekly (starred)

“An open coffin in a flower-filled room, an urn for offerings and another for sticks of incense, chanting monks, and black-suited gangsters... The novel is absolutely brilliant. Family Business offers an intricate puzzle, to be read carefully, from the award-winning Rozan."
— Booklist (starred)

"As always, Rozan’s intelligent, witty prose is a treat. Newcomers as well as devotees will be enthralled."
— Publishers Weekly (starred)

"In addition to her formidable writing skills, Rozan’s own endeavors as an architect of 20 years undoubtedly contribute to the novel's excellent structure."
— Booklist (starred)

“Outstanding. Rozan's intricate plotting and affinity for characterization is seamless, making the reader remember how much we missed spending time with these private detectives. A rich, deeply satisfying mystery."
— Oline Cogdill, Associated Press

“Blood and the blues are cooking down on the Delta in the triumphant return of Lydia Chin and Bill Smith. Rozan’s Paper Son is crawfish pie full of surprises served up by this master of the PI genre.”
— Reed Farrel Coleman, New York Timesbestselling author of What You Break

“Once again, S. J. Rozan proves why she is the consummate pro. Not only one hell of a detective book, the story also takes on a hidden gem of Southern culture—Chinese history in the Mississippi Delta. Rozan continues to entertain with this wonderful series by taking us deep into the most unexpected and fascinating worlds. I have no doubt she’s walked these Mississippi backroads.”
— Ace Atkins, New York Times bestselling author of The Sinners and Robert B. Parker’s Old Black Magic