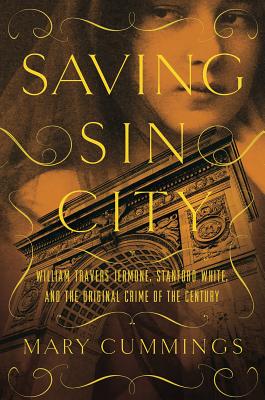 District Attorney William Travers Jerome's name.rang out like a death knell to a criminal element that had previously acted with impunity in turn-of-the-century New York. Jerome wasn't intimidated by the enormous sway that Tammany Hall held over the city or the exalted social standing of the targets of his investigations. His most infamous case, however, was the cold-blooded murder of the renowned architect and dedicated hedonist, Stanford White, by the husband of Evelyn Nesbit, the celebrated Girl in the Red Velvet Swing. An atmospheric and exciting recreation of an era that pulsed with the kind of tacky, vulgar glamour that seems uniquely American.

When Stanford White, one of the most famous architects of the era—whose mark on New York City is second to none—was murdered by Harry K. Thaw in 1906, his death become known as “The Crime of the Century.”

But there were other players in this love triangle gone wrong that would play a part in the incredible story of White’s murderer. Chief among them was the ambitious district attorney William Travers Jerome, who had the opportunity to make—or break—his career with his prosecution of Thaw. Award-winning journalist Mary Cummings reveals a new angle to this incredible crime through Jerome’s story—a story that is ripe for our post-“Serial” era.

Thaw was the debauched and deranged heir to a Pittsburgh fortune who had a sadistic streak. White was an artistic genius and one of the world’s premier architects who would become obsessed with a teenaged chorus girl, Evelyn Nesbit. White preyed on Nesbit, who, in a surprising twist, also became a fixation for Thaw. Nesbit and Thaw would later marry, but Thaw’s lingering jealousy and anger toward White over his past history with Nesbit would explosively culminate in White’s shocking murder—and the even more shocking trial of Thaw for a murder that was committed in front of dozens of eye witnesses.

The promising young D.A. would find his faith in himself and the law severely tested as he battled colorful crooks, licentious grandees, and corrupt politicians.  Cummings brilliant reveals the social issues simmering below the surface of New York that Jerome had to face. Filled with mesmerizing drama, rich period details, and fascinating characters, Saving Sin City sheds fresh light on crimes whose impact still echoes throughout the twenty-first century.

Mary Cummings is a writer and historian. She has been awarded by the New York Press Association for her obituary of Joseph Heller and a “Best In-Depth Reporting” Award for “Troubled Waters,” a series on Long Island’s threatened groundwater supply. She has written for The New York Times, Newsday, Time Out New York, and more, and was the arts editor and principal feature writer at The Southampton Press.  She is a graduate of Smith College with a master’s degree from Stony Brook University. She lives in Southampton, New York.

‘What is the chief end of man?’ Mark Twain asks. ‘To get rich. In what way? Dishonestly if we can, honestly if we must.’ Add sex and ego as two more goals and the self-destructive means to those ends (lusted after by women, too) are re-examined in Ms. Cummings’s Saving Sin City. Ms. Cummings focuses on Jerome, the Manhattan district attorney, in a methodical, but engrossing account.


A story of a time not unlike our own, when New Yorkers were swept up in a ‘contagious lust for riches.’ A fabulously entertaining tale, well told—and sobering

This work of narrative nonfiction offers a richly detailed plunge into the excesses of the Gilded Age, as revealed in one infamous love triangle. Journalist Cummings adds a new dimension to a case thats often been written about, that of the murder of famed New York society architect Stanford White by Harry K. Thaw, a psychopathic millionaire playboy. Cummings gift for the odd detail and for describing physical settings make this latest account of the Stanford White murder a standout.

Cummings brings the Gilded Age to vivid life, with the barest suggestion of connections to today’s click-bait news culture and epidemic of ‘affluenza.’ For popular history buffs as well as true crime fans.

Like the public at the time of the murder, I craved fresh details. Indeed, I thought I knew it all, which is why Saving Sin City is so much fun. The fine reporter that she is, Ms. Cummings sets a scene with an economy of words and sly metaphors. Cummings shifts from ballrooms, to louche art studios and restaurants, to crime scenes and courtrooms. Not only do those scenes convey a strong sense of this extraordinary bygone era, they crackle with authenticity.


What an entertaining and exhilarating read. Deeply researched and thought-provoking, this book is a joyride through the history of New York.
— Brad Ricca, author of Mrs. Sherlock Holmes and Super Boys

Saving Sin City is The Age of Innocence meets Dominck Dunne. Mary Cummings is a wonderful storyteller and brings to life a rich, fascinating era at the turn of the last century, from ballrooms to courtrooms, with a fascinating cast of characters, high and low.

— Steven Gaines, author of Philistines at the Hedgerow