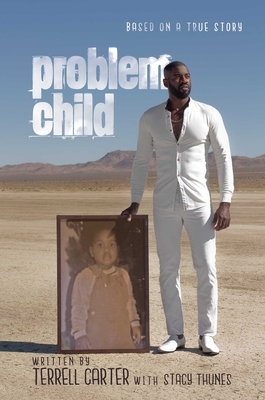 Problem Child is a heart-wrenching story that will take you on an emotional rollercoaster ride that makes the Twilight Zone look like Disneyland.

Problem Child is the unbelievably true story of Terrell Carter, an American musician and actor who grew up in Buffalo, New York, in a dysfunctional family, each member crazier than the next. And the Problem Child is the only one in the story who may, or may not, actually have a problem. An emotional journey of trials and revelations, with a huge secret at its core, this story may force you to laugh—just to keep from crying.

“My beautiful baby boy, even more beautiful on the inside, and he sings even better than that. Now Ms. Patti is giving him his wings to fly among the greats.”—Patti LaBelle

Writer Terrell Carter is an American actor/singer and Buffalo native. Carter has worked with some of the greats, such as Quincy Jones, Patti Labelle, P-diddy, and Beyoncé. He is best known for his roles in the Tyler Perry franchise, from the Madea touring stage plays to his role in the movie Diary of a Mad Black Woman as Bishop Carter, singing the well-known gospel hit “Father Can you Hear Me.” Most recently, Carter portrayed the cunning Warren Dubois on the Fox Television hit series Empire where he played opposite Phylicia Rashad, Taye Diggs, Jussie Smollett, and Taraji P. Henson. Carter is now taking up his hand at writing, starting with his own story in his memoir Problem Child.

Stacy Thunes is an international actress, writer, editor, and translator originally from Marin County, California. In 1988 she moved to Germany and has been living and working in Europe ever since. Recently she starred in the NBCUniversal/Syfy series Spides playing police captain Vera Kaplan. This is her first co-writing assignment with Mr. Carter.