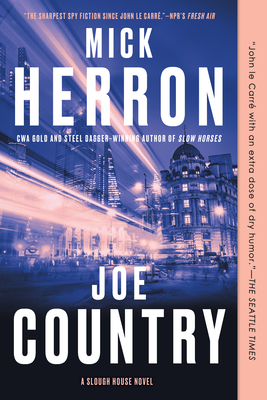 This is book number 6 in the Slough House series.

The sixth installment of the Slough House series shows that Herron is still on top of his game. Jackson Lamb's bureau of misfit agents are reeling from the slaughter of their colleagues and a new recruit who may possibly be a psychopath. Then their nemesis makes an untimely reappearance. The chase is on, and it soon becomes clear that the hunted may very well be the hunter. Thanks to Herron's garrote-tight plotting and kill-the-hostages sense of humor, the tension is only relieved by the reader's laughter. Another winner.

If Spook Street is where spies live, Joe Country is where they go to die.

In Slough House, the London outpost for disgraced MI5 spies, memories are stirring, all of them bad. Catherine Standish is buying booze again, Louisa Guy is raking over the ashes of lost love, and new recruit Lech Wicinski, whose sins make him an outcast even among the slow horses, is determined to discover who destroyed his career, even if he tears his life apart in the process.

Meanwhile, in Regent’s Park, Diana Taverner’s tenure as First Desk is running into difficulties. If she’s going to make the Service fit for purpose, she might have to make deals with a familiar old devil . . .

And with winter taking its grip, Jackson Lamb would sooner be left brooding in peace, but even he can’t ignore the dried blood on his carpets. So when the man responsible for killing a slow horse breaks cover at last, Lamb sends the slow horses out to even the score.

Mick Herron is a British novelist and short story writer who was born in Newcastle and studied English at Oxford. He is the author of the Slough House espionage series, four Oxford mysteries, and several standalone novels. His work has won the CWA Gold Dagger for Best Crime Novel, the Steel Dagger for Best Thriller, and the Ellery Queen Readers Award, and been nominated for the Macavity, Barry, Shamus, and Theakstons Novel of the Year Awards. He currently lives in Oxford and writes full-time.

“Suspense, spycraft, dry wit and vulgar humor are all well-deployed in this satisfying work by Mr. Herron, whose style can accommodate everything from a tough action scene to a lyrical elegy.”
—Tom Nolan, The Wall Street Journal

“Herron writes squeakingly well-plotted spy thrillers. More than that, he composes—at the rate of a pulpist—the kind of efficient, darkly witty, tipped-with-imagery sentences that feel purpose-built to perforate my private daze of illiteracy. More than that, he’s a world-bringer, the creator of a still-growing fictional universe with its own gravity, lingo, and surface tension.”
—The Atlantic

“Herron blends character, place and espionage into a riveting melange that I’ve only encountered in the best of John le Carré or Len Deighton . . . Read one and you're hooked for the whole series.”
—The Globe and Mail

“A series that hits every mark—wicked, black humor, complex characters and breathless plotting.”
—The Cleveland Plain-Dealer

“Mick Herron is a master of misdirection. It’s a skill, it just so happens, that spies and their handlers require in abundance, and one that Herron wields with unerring effectiveness in his thrillers.”
—Daneet Steffens, CrimeReads

“The espionage series you should be reading right now.”
—Zoomer Magazine

“Though Joe Country is Mick Herron's sixth novel in his Slough House series, set in Britain's intelligence community, it stands on its own. Newcomers need not be familiar with the previous books, but this installment is so taut and witty, fans will be eager to go back and read from the beginning.”
—Shelf Awareness

“Mr. Herron is as mischievous as he is mesmerizing. Joe Country secures his place as one of the world’s top spy novelists.”
—Irma Heldman, Open Letters

“Droll dialogue, characters who wear their foibles proudly, and observations on the politics of potential vested interest in national security keep the pages turning. Herron solidifies his place as one of Britain’s top spy novelists.”
—Publishers Weekly

“Mick Herron is the John le Carré of our generation.”
—Val McDermid

"Herron cleverly spins the templates of the spy thriller, and his style can bite with the wit of an Evelyn Waugh or Kingsley Amis."
—Tom Nolan, The Wall Street Journal

"[Herron] really is funny and his cynicism is belied, here and there, by flashes of the mingled tenderness and anger that seem to define Britain’s post-Brexit self-reflections."
—Charles Finch, USA Today

"Slough House, in this winning series, is where incompetent or disgraced British spies spend their days on meaningless busywork. That is, unless they stumble into genuine espionage. Herron is a subtle stylist, and he strikes a perfect balance of big-hearted humor and thrilling spy stuff."
—The Seattle Times

“Hilarious and suspenseful . . . Sharper than most espionage fiction being written today and manages to stay uncannily contemporary.”
—St. Louis Post-Dispatch

“[Herron's] cleverly plotted page-turners are driven by dialogue that bristles with one-liners. Much of the humor comes from Herron’s sharp eye for the way bureaucracies, whether corporate or clandestine, function and malfunction. The world of Slough House is closer to “The Office” than to 007.”
—The Associated Press