The Second Biggest Nothing (A Dr. Siri Paiboun Mystery #14) (Hardcover) 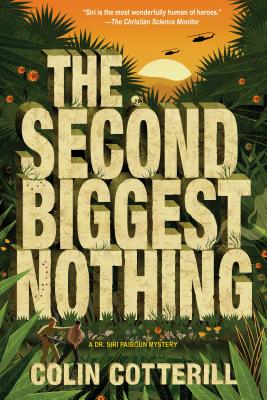 This is book number 14 in the A Dr. Siri Paiboun Mystery series.

In this dark, quirky fourteenth Dr. Siri Paiboun mystery set in Communist Laos in the early '80s, a death threat sends Dr. Siri down memory lane, from Paris in the ’30s to war-torn Vietnam in the ’70s, to figure out who's trying to kill him now.

Vientiane, 1980: For a man of his age and in his corner of the world, Dr. Siri, the 76-year-old former national coroner of Laos, is doing remarkably well—especially considering the fact that he is possessed by a thousand-year-old Hmong shaman. That is, until he finds a mysterious note tied to his dog’s tail. Upon finding someone to translate the note, Dr. Siri learns it is a death threat addressed not only to him, but to everyone he holds dear. Whoever wrote the note claims the job will be executed in two weeks.

Thus, at the urging of his wife and his motley crew of faithful friends, Dr. Siri must figure out who wants him dead, prompting him to recount three incidents over the years: an early meeting with his lifelong pal Civilai in Paris in the early ’30s, a particularly disruptive visit to an art museum in Saigon in 1956, and a prisoner of war negotiation in Hanoi at the height of the Vietnam War in the ’70s. There will be grave consequences in the present if Dr. Siri can’t decipher the clues from his past.

Colin Cotterill is the author of twelve other books in the Dr. Siri Paiboun series: The Coroner’s Lunch, Thirty-Three Teeth, Disco for the Departed, Anarchy and Old Dogs, Curse of the Pogo Stick, The Merry Misogynist, Love Songs from a Shallow Grave, Slash and Burn, The Woman Who Wouldn’t Die, Six and a Half Deadly Sins, I Shot the Buddha, The Rat Catchers’ Olympics, and Don’t Eat Me. His fiction has won a Dilys Award and a CWA Dagger in the Library. He lives in Chumphon, Thailand, with his wife and a number of deranged dogs.

Praise for The Second Biggest Nothing

“Another rollicking chronicle from Colin Cotterill, source of fun and games and mayhem in the otherwise tightly controlled Communist community of the Laos capital Vientiane . . . A delight.”
—The Washington Times


“[Dr. Siri] has rarely been funnier or more astute. Cotterill is writing at the top of his game.”—Publishers Weekly, Starred Review

[Siri] is the most wonderfully human of heroes."
—The Christian Science Monitor

“You get a real feeling for what Laos was like in the ’70s. The humor is wonderful, too.”
—New York Post