Chekhov Becomes Chekhov: The Emergence of a Literary Genius (Hardcover) 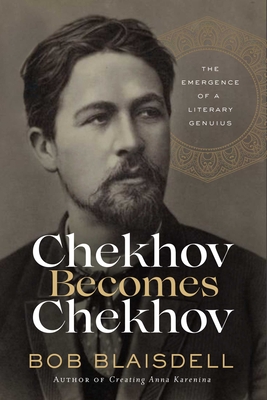 A revelatory portrait of Chekhov during the most extraordinary artistic surge of his life.

In 1886, a twenty-six-year-old Anton Chekhov was publishing short stories, humor pieces, and articles at an astonishing rate, and was still a practicing physician.  Yet as he honed his craft and continued to draw inspiration from the vivid characters in his own life, he found himself—to his surprise and occasional embarrassment—admired by a growing legion of fans, including Tolstoy himself.

He had not yet succumbed to the ravages of tuberculosis. He was a lively, frank, and funny correspondent and a dedicated mentor.  And as Bob Blaisdell discovers, his vivid articles, stories, and plays from this period—when read in conjunction with his correspondence—become a psychological and emotional secret diary.

When Chekhov struggled with his increasingly fraught engagement, young couples are continually making their raucous way in and out of relationships on the page. When he was overtaxed by his medical duties, his doctor characters explode or implode. Chekhov’s talented but drunken older brothers and Chekhov’s domineering father became transmuted into characters, yet their emergence from their family's serfdom is roiling beneath the surface.

Chekhov could crystalize the human foibles of the people he knew into some of the most memorable figures in literature and drama.

In Chekhov Becomes Chekhov, Blaisdell astutely examines the psychological portraits of Chekhov's distinct, carefully observed characters and how they reflect back on their creator during a period when there seemed to be nothing between his imagination and the paper he was writing upon.

Bob Blaisdell is Professor of English at the City University of New York’s Kingsborough College and the author of Creating Anna Karenina. He is a reviewer for the San Francisco Chronicle, the Los Angeles Review of Books, The Christian Science Monitor, and the editor of more than three dozen Dover literature and poetry collections, including a collection of Chekhov's love stores.  He lives in New York City.

"Absorbing, pleasurable, and as unaffected as its subject. [Blaisdell] doesn’t simply (as the title promises) explain how Chekhov came to be Chekhov but rather how impossible it was for him to become anybody else. It’s the sort of book that dedicated readers rarely find, one that doesn’t presume to teach us about Chekhov so much as simply enjoy him. It is like reading along with a fellow lover of Chekhov, attentive to the nuances of the life behind the work."

“A celebration of the enduring power of literary creativity. The mystery of Chekhov’s genius is thrown into even sharper relief, a rare accomplishment in a genre that’s often the playground of know-it-alls. Blaisdell’s reading reaps handsome rewards. The author’s overflowing enthusiasm never distracts from the main performance––Anton Chekhov’s miraculous transformation from paid humorist to profound commentator on the human condition. As we turn the pages of Chekhov Becomes Chekhov, the author’s delight is ours, too.”
— The Wall Street Journal

"A work of love...Blaisdell’s incredibly researched work is a treasure trove of insight and information for scholars and fans of Russian literature. For generations to come, it will be a staple for Chekhov studies."
— Library Journal, starred review

“Two years in the life and work of the Russian master, where Blaisdell draws from Chekhov’s personal correspondence and references several previous biographies in conjunction with close readings of his numerous stories. Blaisdell offers meaningful insights into Chekhov’s life and writing.”
— Kirkus Reviews

"A penetrating take on Anton Chekhov's development as a writer. Blaisdell seamlessly blends biography and critical analysis to offer a bracing look at a formative period in the life of a literary legend. The result is a stirring portrait of an artist coming into his own."
— Publishers Weekly

"That Creating Anna Karenina is a major contribution to Tolstoy scholarship makes it no less of a delight to read. Blaisdell's passion for the subject, and his always-surprising discoveries about the great man and his creation, kept me turning the pages unstoppably. This is a wonderful book."
— Ian Frazier, author of Travels in Siberia, staff writer at The New Yorker

“Captivating.  How did Anna Karenina evolve from a trivial high-society adulteress, whom Tolstoy despised, into one of the deepest, most sensitive tragic heroines in all of literature? What happened inside Tolstoy to condition this metamorphosis? Creating Anna Karenina is a worthy companion to the novel."
— Janet Fitch

"In its study of the comings and goings of the Tolstoy household at the time of the novel’s composition, Creating Anna Karenina asks if one of the world’s greatest novels was in fact just as much a product of everyday minutia—like who stops by for a visit with what kind of gossip to tell—as it was the culmination of long-simmering ideas about morality and desire."

"A fuller understanding of any work—and especially of its creation—requires the resurrection of its creator and his milieu.  Blaisdell manages to do precisely that."
— Boris Dralyuk, Executive Editor, Los Angeles Review of Books, from the Foreword

"Blaisdell conjures the novelist’s world, and painstakingly reveals the overlaps with the world of the novel. Tolstoy breathed in his world, and exhaled the novel."
— Professor Michael Denner, Editor of Tolstoy Studies Journal