Coffee With Hitler: The Untold Story of the Amateur Spies Who Tried to Civilize the Nazis (Hardcover) 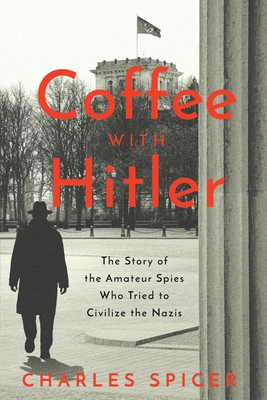 The fascinating story of how an eccentric group of intelligence agents used amateur diplomacy to penetrate the Nazi high command in an effort to prevent the start of World War II.

"How might the British have handled Hitler differently?” remains one of history’s greatest "what ifs."

Coffee with Hitler tells the astounding story of how a handful of amateur British intelligence agents wined, dined, and befriended the leading National Socialists between the wars. With support from royalty, aristocracy, politicians, and businessmen, they hoped to use the recently founded Anglo-German Fellowship as a vehicle to civilize and enlighten the Nazis.

At the heart of the story are a pacifist Welsh historian, a World War I flying ace, and a butterfly-collecting businessman, who together offered the British government better intelligence on the horrifying rise of the Nazis than any other agents. Though they were only minor players in the terrible drama of Europe’s descent into its second twentieth-century war, these three protagonists operated within the British Establishment. They infiltrated the Nazi high command deeper than any other spies, relaying accurate intelligence to both their government and to its anti-appeasing critics. Straddling the porous border between hard and soft diplomacy, their activities fuelled tensions between the amateur and the professional diplomats in both London and Berlin. Having established a personal rapport with President Franklin D. Roosevelt, they delivered intelligence to him directly, too, paving the way for American military support for Great Britain against the Nazi threat.

The settings for their public efforts ranged from tea parties in Downing Street, banquets at London’s best hotels, and the Coronation of George VI to coffee and cake at Hitler’s Bavarian mountain home, champagne galas at the Berlin Olympics, and afternoon receptions at the Nuremberg Rallies. More private encounters between the elites of both powers were nurtured by shooting weekends at English country homes, whisky drinking sessions at German estates, discreet meetings in London apartments, and whispered exchanges in the corridors of embassies and foreign ministries.

Charles Spicer is a debut author whose recent doctorate on this subject has been examined by leading historians and acknowledged as a groundbreaking work. He completed his Masters from the University of Cambridge and his PhD from the University of London. Coffee with Hitler is based on eight years of painstaking research among letters, intelligence reports, and other primary sources, many of which have been lost or overlooked by historians for the past eighty years. Charles lives in Suffolk, England.

"This engaging book offers a warning from history that remains terrifyingly relevant today."
— The Observer (UK)

"His meticulously researched, vividly written book takes 'civilising rather than appeasing as its central theme.' This is a complex tale, but as skillfully narrated by Spicer, it moves along briskly. His main characters are not easy to characterize either, but he brings them to life, with all their contradictions."

"Charles Spicer’s Coffee With Hitler has the cover and characters of an Alan Furst novel, but it is a true story of double-dealers and shifting shades of gray."

"Newly available primary sources, including the previously unseen papers of Conwell-Evans, show that the intelligence supplied to the British government by Tennant, Conwell-Evans, and Christie was superior to that delivered by professional diplomats and MI5. Spicer makes a strong case that the AGF men offered a reasonable alternative to Chamberlain’s policy of appeasement. Readers will make up their own minds as to whether it's realistic to think that Hitler, or any other tyrant, could be tamed."
— Booklist

"A lively study of the amateur British intelligence agents who…hoped to avert a second war in Europe by building rapport with the Third Reich politically, economically and socially. The author engagingly recounts a steady stream of social events, banquets, conferences, cultural exchanges, and semi-official visits among well-known British political figures and top-level Nazis. A captivating and convincing revisionist history."

"The escalation of Nazi violence, Edward VIII’s unexpected abdication, an unprepared Britain, and a government ignoring the danger signs of war all make for a heady brew and an exciting read. Will be easy for history lovers to enjoy."

"This compelling book captures the double-edged nature of 'one mainstay of British values' – giving 'even the most blatantly disgusting people the benefit of the doubt.'"
— The Week (UK)

"Charles Spicer's meticulously researched, fresh-thinking, calm, and empathetic book dispels the smog of misunderstanding that has enabled members of the Fellowship as 'Nazi-friendly.' Spicer, who has given close, neutral, and unerring scrutiny of the sources, proves to be a brisk, fair-minded, and authoritative revisionist."
— Richard Davenport-Hines, Times Literary Supplement (UK)

"In this very well-researched and well-written work of historical revisionism, Charles Spicer reminds us of the important fact that not every Briton who wanted better relations with Nazi Germany did so from malign motives. Some were Germanophile, myopic, naïve, and amateur, but essentially well meaning. Understandably, they were incapable of believing—until it was almost too late—that Adolf Hitler was as evil as we, with our total historical hindsight, know him to have been.”