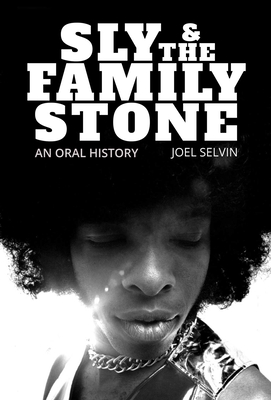 Their music changed pop history, but we’ve never known much about the people who made it…until now.

“…the musical trajectory of Sly & The Family Stone, and especially its namesake and leader, Sly Stone (born Sylvester Stewart), makes even the most shocking episode of Behind the Music look like Nickelodeon programming. Esteemed music journo Joel Selvin chronicles the good, the bad, the ugly (and the really ugly), in a new reissue of his 1998 book, Sly & The Family Stone: An Oral History.” —Bob Ruggiero, Houston Press

Sly Stone shook the foundations of soul and turned it into a brand new sound that influenced and liberated musicians as varied as Miles Davis, Stevie Wonder, and Herbie Hancock. His group—consisting of Blacks and whites, men and women—symbolized the Woodstock generation and crossed over to dominate pop charts with anthems like “Everyday People,” “Dance to the Music,” and “I Want to Take You Higher.”

Award-winning journalist and bestselling author Joel Selvin weaves an epic American tale from the voices of the people around this funk phenomenon: Sly’s parents, his family members and band members (sometimes one and the same), and rock figures including Grace Slick, Sal Valentino, Bobby Womack, Mickey Hart, Clive Davis, Bobby Freeman, and many more. In their own words, they candidly share the triumphs and tragedies of one of the most influential musical groups ever formed—“different strokes” from the immensely talented folks who were there when it all happened.

“Joel Selvin, the veteran music critic of the San Francisco Chronicle, published a thoroughgoing, book-length oral history of the group in 1998 that is as disturbing and chilling a version as you'll ever find of the ‘dashed ’60s dream’ narrative: idealism giving way to disillusionment, soft drugs giving way to hard, ferment to rot.” —David Kamp, “Sly Stone’s Higher Power” Vanity Fair, August 2007

Available for the first time in years, Sly & the Family Stone: An Oral History, is an unflinching look at the rise and fall one of music’s most enigmatic figures.

Joel Selvin is an American San Francisco–based music critic and author known for his weekly column in the San Francisco Chronicle, which ran from 1972 to 2009. Selvin has written more than 20 books covering various aspects of pop music—including the No. 1 New York Times bestseller Red: My Uncensored Life In Rock with Sammy Hagar—and published articles in Rolling Stone, the Los Angeles Times, Billboard, and Melody Maker. He has written liner notes for dozens of recorded albums and appeared in countless documentaries. His most recent book is Hollywood Eden: Electric Guitars, Fast Cars and the Myth of the California Paradise.