Nine Quarters of Jerusalem: A New Biography of the Old City (Hardcover) 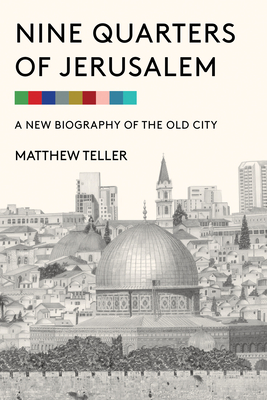 This unique, absorbing biography of Jerusalem brings to light its overlooked histories and diverse contemporary voices.

In Jerusalem, what you see and what is true are two different things. The Old City has never had “four quarters” as its maps proclaim. And beyond the crush and frenzy of its major religious sites, many of its quarters are little known to visitors, its people ignored and their stories untold. Nine Quarters of Jerusalem lets the communities of the Old City speak for themselves. Ranging from ancient past to political present, it evokes the city’s depth and cultural diversity.

Matthew Teller’s highly original “biography” features the Old City’s Palestinian and Jewish communities, but also spotlights its Indian and African populations, its Greek and Armenian and Syriac cultures, its downtrodden Dom Gypsy families, and its Sufi mystics. It discusses the sources of Jerusalem’s holiness and the ideas—often startlingly secular—that have shaped lives within its walls. It is an evocation of place through story, led by the voices of Jerusalemites.

Matthew Teller writes for the BBC, The Guardian, Times of London, Financial Times, and other global media. He has produced and presented documentaries for BBC Radio and has reported for the BBC’s From Our Own Correspondent program from around the Middle East and beyond. He is the author of several travel guides, including the Rough Guide to Jordan. His most recent book is Quite Alone: Journalism from the Middle East 2008–2019.

“[Teller’s] highly perceptive and readable book…combines millennia of Jerusalem’s history with insightful interviews with its residents…a subtle portrait of the current reality at the heart of the world’s most intractable and divisive conflict.” —The Observer

“[An] engaging biography…Teller is an informed, enthusiastic guide.” —Financial Times

“A love letter to the people of the Old City…Teller’s book [is] a rare treasure.” —Jerusalem Post

“Teller excels in piecing together the old and the new, religion and politics, money and family, combining academic research with powerful human stories. In his colorful style, he brings the city and its occupants to life, taking readers on a breathtaking journey…a remarkable book.” —Arab News

“An original and engaging take on the city…packed with fascinating material.” —Tel Aviv Review of Books

“Evokes the sights, smells, and flavors of ‘Old’ Jerusalem effectively…[Teller] is an enchanting but angry storyteller; angry about the injustices and inequities experienced in the city over centuries…an engrossing travelogue.” —Catholic Herald

“This telling of history spotlights the characters, communities, and institutions that have given the Old City a heartbeat underneath all the grandeur and mythology…Teller’s stories are informed by dogged detective work.” —Middle East Eye

“Teller is a travel writer by background and it shows in his descriptions of Jerusalem…seemingly little things are what makes this book stand out.” —Asian Review of Books

“The Old City of Jerusalem has found an inspired, imaginative, and iconoclastic biographer. Teller set himself the modest task of telling stories. The end result, however, is a highly readable book, a vivid portrait, and a fresh perspective on this infinitely complex city.” —Avi Shlaim, Emeritus Professor at the University of Oxford and author of The Iron Wall: Israel and the Arab World

“This book peels away the layers of deception to debunk the myth that the Old City is composed of four distinct quarters—a notion that continues to plague the city and underpins the assumption that present-day conflict comes down to age-old hatred between religions…Teller takes the reader on a trip that reveals the Old City of Jerusalem better than any other book written about the city.” —Raja Shehadeh, author of Palestinian Walks: Forays into a Vanishing Landscape

“Original and illuminating…what a good book this is.” —Jonathan Dimbleby, author of Operation Barbarossa: The History of a Cataclysm

“Captivating. Teller’s language flows lightly but his feelings run deep, and it is difficult to pull away from his descriptions of the Old City.” —Noga Tarnopolsky, Jerusalem reporter, Los Angeles Times

“For any other city, a book that tells the stories of its residents might be unremarkable—but for Jerusalem, so often weighed down by ancient history and the politics of occupation, Teller has produced a book that is borderline radical in its focus on the people who live there.” —Zora O’Neill, author of All Strangers Are Kin: Adventures in Arabic and the Arab World

“Exploding the myths about age-old hatreds between religions, this must-read book lays bare the role of arrogant British colonialists and missionaries in shaping Jerusalem’s Old City according to their vision. It challenges the misleading maps that serve the Israeli narrative and encourages visitors to see beyond the facade. A must-read exposé.” —Diana Darke, author of Stealing from the Saracens: How Islamic Architecture Shaped Europe

“A marvel. Teller deftly braids the historical, the political, and the experiential. His book is at once universal in scope and intimate.” —Massoud Hayoun, author of When We Were Arabs: A Jewish Family’s Forgotten History

“A lyrical and electric book, rich and intensely evocative (with a twist of cumin), as the author shares his lifelong obsession for one of the most over-documented and misunderstood cities on earth. This is not another biography but an altogether more important book, about the human tapestries that could, possibly, weave together a new Jerusalem.” —Louisa Waugh, author of Meet Me in Gaza: Uncommon Stories of Life Inside the Strip

“There has been no book like this written in the last twenty years…Matthew Teller has resurrected this city.” —George Hintlian, author of History of the Armenians in the Holy Land

“In this riveting book, Matthew Teller establishes himself early as a trustworthy and insightful interpreter of Jerusalem’s millennia of history and a keen observer of today’s vibrant city. Every chapter of Nine Quarters of Jerusalem makes surprising connections between seemingly unaffiliated events, people, and places. Teller presents a palimpsestic history that interweaves interviews and conversations with locals, the author’s own photographs, documents, maps—even birdsong—with astonishing sensitivity. He invites readers to approach the city with all of their senses, seeing Jerusalem stone on all the buildings, smelling food and incense in the marketplaces, hearing pilgrims sing along the Via Dolorosa, placing our hands on piles of cloth in a tailor’s shop, and tasting bitter coffee and sweet pastries. You’ll come away with a sense of the holy as a decidedly human phenomenon, best observed up close and scaled to our own conceptions of history and time. A powerful book!” —Kristina Richardson, author of Roma in the Medieval Islamic World: Literacy, Culture, and Migration