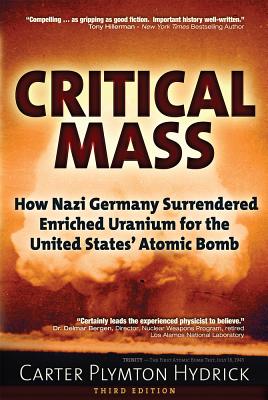 By Carter Plymton Hydrick
$24.95
Email or call for price.

On May 19, 1945, eleven days after the surrender of Nazi Germany in Europe, a U-boat was escorted into Portsmouth Naval Yard, New Hampshire. News reporters covering the surrender of U-234 were ordered, contrary to all previous and later U-boat surrender procedures, to keep their distance from crew members and passengers of U-234, on threat of being shot by the attending Marine guards. Why the tight security? Buried in the nose of the specially-built mammoth boat, sealed in cylinders “lined with gold,” was 1,120 pounds of enriched uranium labeled “U235”the fissile material from which atom bombs are made. Critical Mass documents how these Nazi bomb components were then used by the Manhattan Project to complete both the uranium bomb dropped on Hiroshima and the plutonium bomb dropped on Nagasaki, to defeat the Japanese and win World War Two and global domination in the modern age.

Carter Plymton Hydrick has been a professional writer and communicator for over a quarter century. While Critical Mass is his first book, he has written or produced hundreds of scripts, articles, and advertisements, as well as written, produced and directed over 100 film and video productions, including work on feature films. He has served as director of corporate communications for a Fortune 500 company, and as a global marketing executive for one of the world’s largest computer companies. He and Kris, his wife of over 40 years, make their home near Houston, Texas. They are the parents of four children and grandparents of 14 at this writing.

“The assertion in Critical Mass that the uranium surrendered to U.S. authorities onboard the German submarine U-234 was enriched U-235 [enriched uranium] is certainly a credible conclusion in view of the storage, containment and prevailing shipping conditions." —Dr. Gary Sandquist, Instructor, Nuclear Engineering, United States Military Academy, West Point

"Critical Mass brings to the surface defining new information, long hidden within archives, about the birth of the Atomic Bomb . . . . Should be in every library." —D. Ray Smith Oak Ridge Y-12 (uranium enrichment facility) Historian

“A coherent and well researched history of events that have been covered up for half a centuryexciting and revealing!" —Otis Maclay, Pacifica Radio Host

“I don’t know much about making buna, synthetic rubber, but I know the electrical consumption that I.G. Farben’s directors described at their buna plant at Auschwitz is very much in line with the huge electrical requirements for developing magnetically enriched uranium . . . . Certainly leads the experienced physicist to believe." —Dr. Delmar Bergen, retired Director, Weapons Program Office, Los Alamos National Laboratory

“I find it difficult to believe the traditional explanation that the Germans spent four fruitless years trying to bring a rubber plant on line, the technology for which they had
previously developed, proven and used. I also cannot comprehend, nor do I believe, a buna (rubber) plant of that time period consumed as much power as the eighth-largest city in the world (Berlinas stated by directors of the plant).” —George M. Ladzun, (Ret.) Director, Process Development, Zeon Chemicals; Manager, Two Synthetic Rubber (buna) Plants, Zeon Chemical