As I Am Presently Known (Paperback) 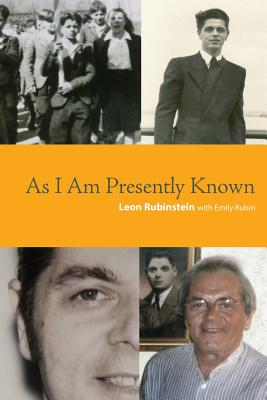 Months after World War II officially ends, a 15-year-old boy still hides in a potato field. The horror of the Holocaust is followed by the horror of survival. The question "Why me?" haunts survivors for the rest of our lives. For some of us, life is only possible under the anesthesia of silence. After 63 years, Leon Rubinstein has broken his silence with this book. As I Am Presently Known is a remarkable story of life's victory over death and about one generation passing the torch to another.


The story of the Jewish people in the twentieth century is one of the great dramas of modern times. It has everything, from the searing tragedy of the Holocaust to the heroic creation of the State of Israel to the emergence of the Jewish community in the United States as the largest and most successful Jewish community in the world. Most people, when they search for the human dimension to these epochal events, come to know the Holocaust through the writings of Anne Frank or Elie Wiesel. They see Israel through the eyes of David Ben-Gurion or Golda Meir. When I look for the human story of what it must have felt like to be a Jew in the twentieth century, I think of my friend and congregant Leon Rubinstein.

Leon experienced it all. Born into the comfortable security of a loving family in a small town in Poland, he would see his world fall apart when the Nazis invaded. He saw his parents led away to be murdered, he experienced the kindness of a Polish Christian and the cruelty of other Polish Christians. After the war, he made his way to Israel, served in the Israeli army and then found a new life and family in America.