The Authoritarians: Their Assault on Individual Liberty, the Constitution, and Free Enterprise from the 19th Century to the Present (Paperback) 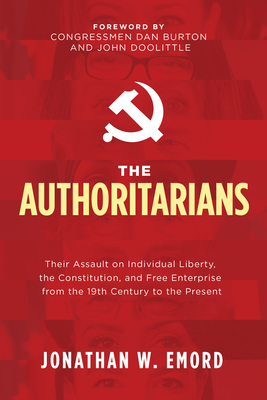 Jonathan W. Emord is one of the nation's foremost experts on constitutional and administrative law and has practiced before the federal courts and agencies for thirty-five years. In The Authoritarians, Emord reveals the untold story and largely hidden practices of Authoritarians who have worked inside the United States government to undermine the Constitution and override rights protections since the earliest days of the Progressive Era.

Emord traces the intellectual origins of Authoritarianism to its Hegelian roots in Germany. He shows how legions of academics, trained to hate the American system of government, became predominant in the major universities of America, entered government as top advisors, and successfully orchestrated an overthrow of the Constitution's limits on power which put the rights of individuals in jeopardy from the Progressive Era through the New Deal to today. In The Authoritarians, readers learn how Authoritarians endorsed forced sterilization of 60,000 American citizens whom they deemed "undesirable" and "unfit". Readers also learn how Authoritarians selectively created monopolies and overcame the constitutional limits on government power the Founding Fathers put in the Constitution to prevent tyranny, thus ushering in the foundation for a socialist state.

In The Authoritarians, Emord reveals the lies told by advocates of the Black Lives Matter organization, Antifa, and the 1619 Project. He presents the startling fact that the first slaves in the Jamestown Colony in 1619 were not blacks, but whites and that in the antebellum South slave owners were not only white, but black. Readers also learn the inherent failings of socialism; the tremendous cost it imposes on human lives; and the grave threat to the survival and success of liberty and justice in America posed by Authoritarians such as Alexandria Ocasio-Cortez, Bernie Sanders, Nancy Pelosi, Chuck Schumer, Ed Markey, Joe Biden, and Kamala Harris. The Authoritarians unveils a detailed strategy for restoring constitutional protection for individual rights and fending off the horrors of a socialist tidal wave now drenching America.