Behind the Bench: Inside the Minds of Hockey's Greatest Coaches (Paperback) 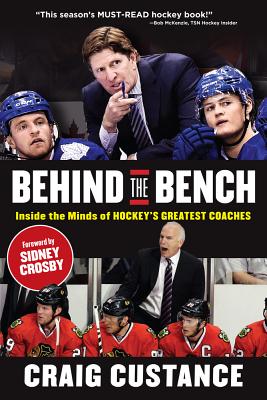 They are motivators, key strategists, tough bosses, and choreographers. They can be branded as heroes, ousted as scapegoats, quietly valued as friends, and everything in between. It's all in the job description for an NHL head coach. In Behind the Bench, ESPN's Craig Custance sits down for film sessions and candid conversations with some of the game's most notable modern luminaries—names like Mike Babcock, Joel Quenneville, Dan Bylsma, Todd McLellan, Ken Hitchcock, and Claude Julien—all of whom share their singular views on topics ranging from leadership secrets to on-ice game plans. Dissect some of hockey's greatest moments with the men who set the pieces in motion. Go straight to the source on what it's like to manage a dressing room full of the league's top stars or execute line changes with everything at stake. Signature games, including Stanley Cup finals, Olympic gold medal clashes, and World Championship contests—both wins and losses—are reflected upon and broken down in detail, making this essential reading for current and aspiring coaches, players, and hockey fans alike.

Craig Custance is a journalist who spent the last decade covering the NHL as a national hockey writer, including six years with ESPN.com and ESPN The Magazine. He left ESPN to join The Athletic, a San Francisco–based sports media startup. He is currently an NHL Insider for The Athletic and editor-in-chief of The Athletic Detroit. Before working at ESPN, Custance wrote for The Sporting News. He spent the first 10 years of his writing career with the Atlanta Journal-Constitution after graduating from Michigan State University. He lives in Clinton Township, Michigan, with his wife, Cassie, and three children, Calvin, Cameron, and Cormac. You can follow Craig on Twitter @craigcustance or read more of his work at www.craigcustance.com. Sidney Crosby has captained the Pittsburgh Penguins to three Stanley Cup Final victories, in 2009, 2016, and 2017. He is a two-time winner of the Hart Memorial Trophy and the Conn Smythe Trophy, as well as two Olympic gold medals and a gold medal at the World Championships.