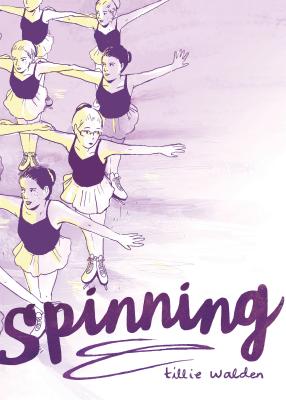 Tillie Walden didn't grow up wanting to be a competitive figure skater, but its reassuring routines are what's keeping her young self together until she figures out what else life has to offer. The Ignatz-Award-winning cartoonist has now turned her coming of age into one of the best graphic memoirs in years. Told in purple-hued imagery that takes in both athletic grace and the unforgiving florescence lights of the skating rink, Walden recounts the petty jealousies and occasional triumphs that kept her involved in the sport, even as she felt herself pulling away. Those expecting a straightforward "Cutting Edge"-style saga of triumph on ice might be confounded. Those looking for a real story suffused with hope and other pleasures should save a spot on the podium for "Spinning."

Tillie Walden's Eisner Award winning graphic memoir Spinning captures what it’s like to come of age, come out, and come to terms with leaving behind everything you used to know.

It was the same every morning. Wake up, grab the ice skates, and head to the rink while the world was still dark.

Weekends were spent in glitter and tights at competitions. Perform. Smile. And do it again.

She was good. She won. And she hated it.

For ten years, figure skating was Tillie Walden’s life. She woke before dawn for morning lessons, went straight to group practice after school, and spent weekends competing at ice rinks across the state. Skating was a central piece of her identity, her safe haven from the stress of school, bullies, and family. But as she switched schools, got into art, and fell in love with her first girlfriend, she began to question how the close-minded world of figure skating fit in with the rest of her life, and whether all the work was worth it given the reality: that she, and her friends on the team, were nowhere close to Olympic hopefuls. The more Tillie thought about it, the more Tillie realized she’d outgrown her passion—and she finally needed to find her own voice.

Tillie Walden is a cartoonist and illustrator from Austin, TX. She is a graduate of the Center for Cartoon Studies, where she now teaches. As of 2022, she has published three graphic novellas with the London based Avery Hill Publishing and three with First Second Books, including her Eisner Award-winning memoir Spinning. She currently lives in Lebanon, New Hampshire with her cat Stan.

Tillie Walden is a cartoonist and illustrator from Austin, TX. She is a graduate of the Center for Cartoon Studies, where she now teaches. As of 2022, she has published three graphic novellas with the London based Avery Hill Publishing and three with First Second Books, including her Eisner Award-winning memoir Spinning. She currently lives in Lebanon, New Hampshire with her cat Stan.

“Tillie Walden's Spinning is an engrossing, gorgeously quiet look back at the 12 years she devoted to figure and synchronized skating.” —New York Times


“Intimate and compelling. A quiet powerhouse of a memoir.” —Kirkus Reviews, starred review

“Quiet and lyrical . . . and deeply satisfying. A stirring, gorgeously illustrated story of finding the strength to follow one’s own path.” —Booklist, starred review

“An honest and intimate coming-of-age story that will be appreciated by tweens and young teens, especially those in competitive sports.” —School Library Journal

“An accessible introduction to the graphic novel form. Older readers will want to graduate from this to Alison Bechdel’s Fun Home.” —The Bulletin of the Center for Children's Books

“This is a beautifully told story that will resonate with anyone who played an instrument, or did gymnastics, or got signed up for skating: these things weren't always what we wanted to do or cared about, but they gave us some focus when everything else was mystery and chaos.” —Lucy Knisley, New York Times bestselling author of Relish: My Life in the Kitchen