Is This Guy For Real?: The Unbelievable Andy Kaufman (Paperback) 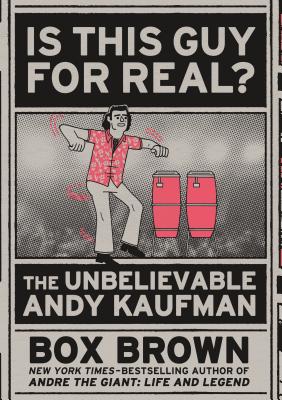 Box Brown hits it out of the park once again with this graphic novel biography of the legendary Andy Kaufman.
Told in Brown's simple, yet charming illustration style, the story of Kaufman's life is told with a with a lot of love. Readers will see how Andy came to be infatuated with Elvis, pro wrestling, conga drums, all of which later became cornerstones of his unique comedy act.
The most attention here is paid to Andy's run as the InterGender Wrestling Champion, a title Andy bestowed upon himself. Kaufman's classic SNL skits are included, as is the notorious appearance he and Jerry The King Lawler made on David Letterman's show in the early 80s.
For anyone who has seem the Jim Carrey film "Man on the Moon", fans of Kaufman from his TV days, or just those who've heard of this boisterous outsider, "Is This Guy For Real?" is a fantastic way to spend an afternoon.

Comedian and performer Andy Kaufman’s resume was impressive—a popular role on the beloved sitcom Taxi, a high-profile stand-up career, and a surprisingly successful stint in professional wrestling. Although he was by all accounts a sensitive and thoughtful person, he’s ironically best remembered for his various contemptible personas, which were so committed and so convincing that all but his closest family and friends were completely taken in.

Why would someone so gentle-natured and sensitive build an entire career seeking the hatred of his audience? What drives a performer to solicit that reaction? With the same nuance and sympathy with which he approached Andre the Giant in his 2014 biography, graphic novelist Box Brown's Is This Guy For Real? takes on the complex and often hilarious life of Andy Kaufman.

"Cartoonist Box Brown has a talent for crafting nonfiction comics that use visuals to illuminate and energize real-world events... [Is This Guy For Real?] is a thorough character study that doesn’t shy away from macro topics, giving readers a comprehensive look at Kaufman’s rise to fame." —The AV Club, from their "10 Most Anticipated Comics of 2018"

"[Is This Guy For Real?] is a well-researched, enjoyable yarn written by the one author working in the comics medium who fans would want to tell Kaufman’s story." —Publishers Weekly

"Box Brown exercises his trademark commitment to dogged research, elegant story construction, and compellingly cartoony artwork in this story about Kaufman’s lifelong connection to the squared circle."—Vulture, from their "The Best Comics to Read This February"