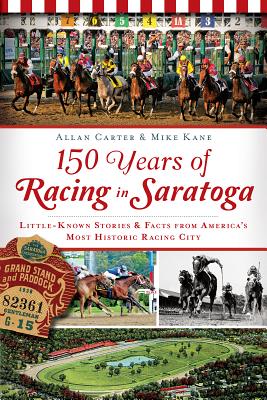 It may not be the Kentucky Derby, but Saratoga Springs went to the horses long before Churchill Downs.

Since the inaugural meeting of August 1863, Saratoga Springs is home to one of the oldest sports venues in the country and has been the scene of memorable races, often featuring legends of the sport. Although some of the epic moments are still familiar today, such as Upset's defeat of Man o' War in the 1919 Sanford Memorial, many of the triumphs and defeats that were once famous have been forgotten. Few remember the filly Los Angeles, who thrived at Saratoga, winning sixteen stakes races, or the influential, sometimes suspicious, reasons why the track was closed three times for a total of six years. Authors Allan Carter and Mike Kane take a look back at these and other important but neglected stories and present statistics from the pre-NYRA years and a rundown of the greatest fields assembled at America's oldest track.