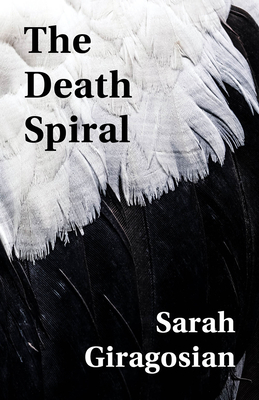 By Sarah Giragosian
$16.95
Click Title for IN STOCK Location

Poetry. Death Spiral, which signifies the cartwheeling display of the American bald eagle as it plummets to the ground, is not only a poem in this excellent collection, but a metaphor for the current state of the country. These beautifully rendered poems ask when will we roll out of our 'death dance, / and fall upwards, in thrall of sky?' While there are other books that address topics found here such as climate change, racism, and our wrought political times, what sets this book apart is its lyrical precision, imaginative leaps, and arresting imagery. Sarah Giragosian is a truly gifted poet.--Charlotte Pence

THE DEATH SPIRAL grounds us in the Anthropocene (a time of mass extinction and climate change), yet refuses to adhere to that 'fact.' Instead, the poet finds a way not only to merge her consciousness, her being, her 'I, ' with that of the absolute other(s)--the animal kingdom, and love--but also to chart a field guide of dazzling formal execution out of our times of terror and loss. Clear-eyed, resilient, and brave, Giragosian both acknowledges 'hope's atrophied muscles' while suggesting another path--one wherein 'irrepressible nature' (neither cruel nor moral) leads the way. Resplendent with the 'ecstasy of disaster, ' origin stories, and the 'blood relation between mammal and stone, ' the poet states her desire plainly: 'To rend.' And in this rending (reminiscent of a Dickinson gone wild), and praise, we are given a 'test of our] freedom, ' an unleashed mind, an otherwise-tragic narrative of death undercut by glorious song.--Virginia Konchan

Giragosian's fierce, gorgeous poems embody our role as one in body and mind with other peoples, plants and animals--living and extinct--arguing a familial connection integral to the survival of species including our own: 'he is a thrashing turtle / on a bone hook, speaking from otherwhere / of his apartness. I point to hearth, to kin...'. These poems hope we won't find ourselves with, 'Nothing left on Earth to love or fear, ' as they invoke the beauty around us, and in us.--April Ossman.