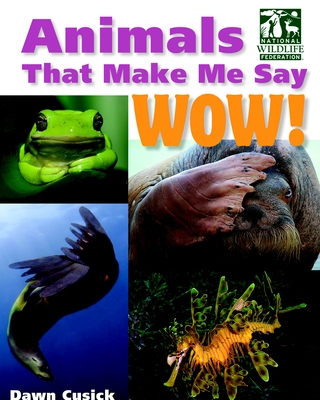 For more than forty-five years, the National Wildlife Federation has been dazzling families with amazing images and stories. Get ready for some supersonic fun that will make you say WOW! Discover jet propulsion in squid and dragonflies, camouflage in cuttlefish and katydids, photosynthesis in salamanders and sea slugs, vocal sacs in frogs, balance in giraffes and spider monkeys, and antenna fencing in crickets. Want more? How about spiders that use air bubbles like gills, skunks that eat bees, sea slugs that steal stinging cells from jellyfish, bower birds that build sparkling nests, and jawfish that brood eggs in their mouths! This book celebrates amazing animal surprises from all over the world with one-of-a-kind photographs from the NWF archives.

The National Wildlife Federation is America's conservation organization protecting wildlife for our children's future. At NWF, they envision a world where people work together to protect wildlife and are able to pass on abundant wildlife and wild places to our children. Dawn Cusick writes award-winning children's nature nonfiction books. Get the Scoop on Animal Poop! was selected to the National Science Teachers Association's 2013 list of Outstanding Science Trade Books for Students K-12, Bankstreet College of Education's 2013 Best Children's Books of the Year list, and was named a finalist in the Children's Book Council's 2013 Children's Choice Book Award and the Animal Behavior Society's 2013 Outstanding Children's Book Award. Her first two children’s books, Bug Butts and Animal Eggs, also won many awards. Ms. Cusick holds a Bachelor’s degree from the University of Florida, a certificate of post-Baccalaureate Major in Biology from the University of North Carolina-Asheville, and a Masters of Science in Biology from Western Carolina University. Her research work involves species' recognition and speciation in cryptic katydids. She teaches general biology and zoology courses at Haywood Community College.

Cusick explores how gravity-defying flight, coiled and tubelike tongues, bite-proof armor and other surprising adaptations in animal bodies and behavior provide a competitive edge.
This presentation of amazing animal facts is loosely organized into three sections: defense, foraging and anatomy. There's a short introduction for each section followed by a series of boxed explanations interspersed among a gallery of close-up photographs, mostly from the National Wildlife Federation archives. Some images are quite wonderful: a family of cygnets riding a swan's back, a porcupine chewing on a branch, an unidentified moth with a coiled tongue. Others are really too small to see details well. Some images are clearly labeled with the creature's name; others can be guessed from the nearby text, but some will be mysteries (perhaps better than the "great egret" caption for the snowy egret picture). Readers are asked some thought-provoking questions as well as offered cool facts. Scavenger-hunt challenges in the concluding section call for both inside and outside research. A companion volume, Animals That Make Me Say OUCH!, follows the same format, but its third section deals with adaptations for hostile environments. Both titles feature lively, colorful design. Best for browsers who like their facts fast.
-Kirkus Reviews

For Animals That Make Me Say OUCH! and Animals That Make Me Say WOW!
These two animal-focused nature books will make kids sit up and take notice. The attractive photos from the National Wildlife Federation show bald eagles performing acrobatics in mid-air; zebras delivering a swift kick, leaving lion predators in their dust; shape-shifting spiders; and a South American male frigate bird with a bright red "bubble chin." The upbeat, accessible text is factual and entertaining, including funny headers and the occasional joke ("What's worse than a jaw of sharp, curved teeth? Two jaws, that's what!"). Each installment contains practicable "Scavenger Hunt" ideas to cultivate scientific observation skills. While younger students will love the vivid photos, older ones will appreciate the informative material. Solid wildlife overviews.
-School Library Journal