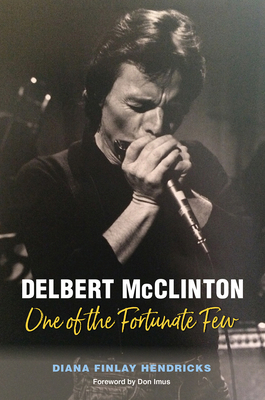 Influenced at a young age by classic country, Tejano, western swing, and the popular music of wartime America, blues musician Delbert McClinton grew up with a backstage pass to some of the most significant moments in American cultural and music history. From his birth on the high plains of West Texas during World War II to headlining sold-out cruises on chartered luxury ships well into his seventies, McClinton admits he has been “One of the Fortunate Few.”

This book chronicles McClinton’s path through a free-range childhood in Lubbock and Fort Worth; an early career in the desegregated roadhouses along Fort Worth’s Jacksboro Highway, where he led the house bands for Jimmy Reed, Muddy Waters, Bo Diddley, and others while making a name for himself as a regional player in the birth of rock and roll; headlining shows in England with a little-known Liverpool quartet called The Beatles; and heading back to Texas in time for the progressive movement, kicking off Austin’s burgeoning role in American music history.

Today, more than sixty years after he first stepped onto a stage, Delbert McClinton shows no signs of slowing down. He continues to play sold-out concert and dance halls, theaters, and festival events across the nation. An annual highlight for his fans is the Delbert McClinton Sandy Beaches Cruise, the longest-running music-themed luxury cruise in history at more than twenty-five years of operation. More than the story of a rags-to-riches musician, Delbert McClinton: One of the Fortunate Few offers readers a soundtrack to some of the most pivotal moments in the history of American popular music—all backed by a cooking rhythm section and featuring a hot harmonica lead.

DIANA FINLAY HENDRICKS, a Texas Hill Country–based writer has spent her career in journalism and feature writing, focusing on Texas and Southern music and culture. She is a regular contributor to the Journal for Texas Music History, Lone Star Music, and recently contributed the James McMurtry chapter to Pickers and Poets: The Ruthlessly Poetic Singer-Songwriters of Texas. .

“Delbert McClinton’s singing, songwriting, and harmonica playing have been at the center of Texas soul and rock and roll so long that it can seem effortless—the man of maximum cool. But in Diana Hendricks’s new biography, she employs his words, those of his peers, and her narrative skill to convey that it’s often been a struggle for him. Her fine book takes us for a knowing ride inside the rough-and-tumble life of an important and hard-working career musician.”—Jan Reid, author of The Improbable Rise of Redneck Rock and Sins of the Younger Sons
— Jan Reid

“Delbert has long been revered as one of the greatest soul and blues singers alive. He’s also a great songwriter, harp player, bandleader, and entrepreneur. In this engaging and revealing biography, you follow his extraordinary journey from Texas roadhouse to international acclaim, including decades of shepherding one of the most successful Blues Cruise companies. Delbert is the nexus of where blues/R&B and country meet, and his life and music span the richest era at the start of rock ’n’ roll. He helped create the music we now love and celebrate as Americana and roots. He’s as fascinating and authentic as his music.”—Bonnie Raitt
— Bonnie Raitt

"There has never been but one Delbert McClinton, and the likes of him will not be known again. This book illuminates what made him and what he made." —Nick Tosches, author of Hellfire: The Jerry Lee Lewis Story
— Nick Tosches

“No other single human epitomizes the pleasures and contradictions of Texas music like Delbert McClinton. Call whatever he has been doing for more than sixty years country, rhythm ’n’ blues, roadhouse rock, honky-tonk, rockabilly, Northern Soul, or beach music, and you won’t be wrong. Delbert McClinton does all of that while delivering a splendiferous uplifting of the soul whenever he opens his mouth in front of a microphone and an audience. Whether it’s Jimmy Reed, the Beatles, or John Belushi, the stories he tells to Diana Finlay Hendricks about the people whose paths he has crossed are mythic and larger than life its own self. Most of them are even true.”—Joe Nick Patoski, author of Willie Nelson: An Epic Life and Stevie Ray Vaughan: Caught in the Crossfire
— Joe Nick Patoski

“Delbert McClinton’s many fans will find One of the Fortunate Few reaffirming, shedding light on a truly selfless, generous soul. Those unfamiliar with Delbert will be instantly drawn to him and will undoubtedly seek out his music and touring schedule. When you realize McClinton was playing at the birth of rock n’ roll in the ‘50s, shared some harmonica tips with John Lennon, and has played just about every kind of American music in every conceivable venue from dives to the world’s biggest stages, you can’t help but admire this living legend. His story is of endurance, sacrifice, perseverance, and ultimately success in the unforgiving often cruel music business.”—Elmore Magazine
— Elmore