I've Been Out There: On the Road with Legends of Rock 'n' Roll (John and Robin Dickson Series in Texas Music, sponsored by the Center for Texas Music History, Texas State University) (Hardcover) 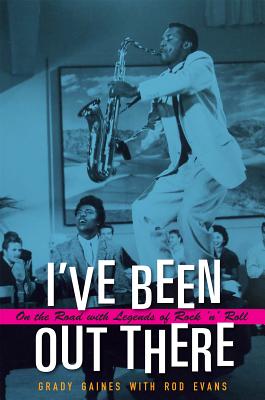 In the 1950s, as the leader of the Upsetters, the original backing band for rock pioneer Little Richard, Grady Gaines first exposed the music world to his unique brand of “honkin’,” bombastic, attitude-drenched saxophone playing.

In the years that followed, the Upsetters became the backing band for Sam Cooke and crisscrossed the country as the go-to-band for revue-style tours featuring James Brown, Gladys Knight and the Pips, the Supremes, Jackie Wilson, Little Willie John, and Etta James.

In I’ve Been Out There, the Houston blues and R&B legend Grady Gaines speaks candidly about his sixty-year music career and life on the road supporting some of the biggest names in blues, soul, and R&B. This annotated autobiographical account details Gaines's professional triumphs and personal sacrifices.

The book contains anecdotes about life on the road and in the studio during a period when the entertainment industry was vastly different, affording readers a glimpse into the creative makeup of a man whose distinctive sax playing powered some of the most popular songs of the era, helped define the genre, and mesmerized countless audiences.

GRADY GAINES, from Houston, Texas, was the musical director and saxophonist for Little Richard’s seminal backing band the Upsetters during the rock ‘n’ roll icon’s biggest hitmaking era in the mid-1950s. He continues to perform as leader of Grady Gaines and the Texas Upsetters. ROD EVANS is an award-winning, Houston-based freelance journalist, writer, and editor.

“Grady Gaines' story--from his first nightclub job in Fifth Ward's Lyons Avenue to national tours with Little Richard--is the story of blues and R&B in the middle of the twentieth century, a sound that shaped popular music worldwide. I've Been Out There also tells how powerful music broke down barriers that had once divided Houston, and our nation, by race.”—Bill White, Former Mayor of Houston, Texas
— Bill White, former mayor of Houston, Texas

“Relatively little is written about backing bands, adding to the importance of I’ve Been Out There, which provides an unusual perspective not typically seen in accounts that come from the leading acts themselves. A peppering of vintage black and white photos throughout contributes to a winner!”—Midwest Book Review
— Midwest Book Review

“As a piece of history, this ranks with the best glimpses into the birth of rock ‘n’ roll, and Gaines even goes so far as to detail the birth of soul as well as how blues grew into R&B.”—Texas Music
— Texas Music