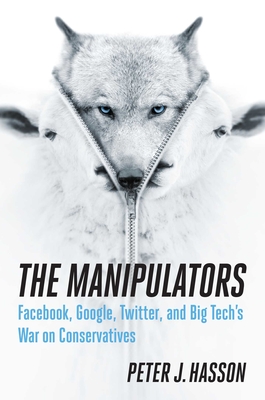 The dawn of the digital age was supposed to be a new era, when everybody would have a voice and battle it out in the marketplace of ideas—intellectual democracy at the touch of a keyboard. Social media offered a way for conservatives to outflank the leftist groupthink that dominated academia, the media, and the political establishment.

But, as investigative reporter Peter J. Hasson shows in his explosive new book, The Manipulators, that's no longer the case.

Big Tech's grip on the levers of information seems unbreakable. Hasson, working with sources deep inside the tech giants, presents a chilling account of companies that relish their coercive power—and aren't shy about using it.

In The Manipulators, you'll learn:

Big Tech has become the greatest threat to free speech and free thought in America. But Big Tech is not invincible. It is still vulnerable to conservative and consumer pressure—though not for long, if Democrats have their way.

Peter Hasson provides a frightening look at the concentrated power of Big Tech, its extraordinary intellectual intolerance, and its determination to silence competing voices and even dictate our thoughts. The Manipulators is a warning about rampant political censorship that will only get worse unless Big Tech meets big opposition.

Peter Hasson is a senior investigative reporter at the Daily Caller News Foundation. His work has been featured in many other publications, including The Federalist, The Daily Signal, and the National Interest. He is also a frequent commentator on radio and television and an advisory board member for Human Coalition Action. A graduate of the University of Dallas, he divides his time between Texas and Washington, D.C.

"Remember when the Internet was going to liberate the world? Twenty years later, the opposite happened: digital technology platforms became terrifyingly efficient tools for social control. How did this happen, and why? It’s a remarkable story, told beautifully in this indispensable book by Peter Hasson."
— TUCKER CARLSON, host of Tucker Carlson Tonight

"For many years Americans were told that technology is an unambiguous benefit to their daily lives. Peter lays out in devastating detail the drawbacks of American political life's migration to social media, and what liberal dominance in that space could mean for the conservative movement of the future. This book is an opening salvo in conservatives’ understanding that private corporations can have as much, if not more, control over the daily lives of our citizens as the government."
— SAAGAR ENJETI